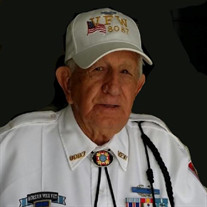 Stephen Julius Szapor Sorrento, FL. - Stephen passed away on Thursday, January 7th at the age of 91. He was born in Passaic, NJ & was of Hungarian & German descent. He lived & worked in northern and southern New Jersey for most of his life and lived on Long Beach Island, NJ for approximately 30 years before moving to Florida. Stephen served in combat during the Korean War, 1st Calvary, 2nd Infantry and received the Combat Infantry Badge. His was a proud member of VFW Post #8087 where he served as a member of the Honor Guard and became affectionately known as “Birdman.” Stephen also volunteered his time working countless hours as a paramedic with Rockaway Neck Volunteer Ambulance Squad, Life Member of Beach Haven First Aid Squad and served as a honorary member of the Beach Haven Fire Co. Stephen had a great love for music, dancing and woodworking. He even took up playing guitar at the age of 85. He held many jobs during his life. He had a house painting business for years before settling into a career as a paramedic in Atlantic City, NJ. He was preceded in death by his parents Joseph and Mary Racz, wife Vivian Szapor, siblings Joe Szapor, Charles Szapor, Dennis Szapor, Rose Szumski. Stephen is survived by his wife Linda Szapor, siblings Ernest Szapor, Madeline C. Pyle, and Mary Lou Kiwior, daughter Susan Glogolich and husband Ken, daughter Sandy Bolchune and husband Larry, son Stephen Szapor and wife Nancy, son Larry Szapor and wife Ann, Robin “Tinker” and Jeff VanMeter, grandchildren, Jennifer, Jason, Lauren, Larry Jr, Samantha, Michael, Stephen, Robert, Christopher, Joseph, Kendyl and great grandchildren Cayden, Colin, Jaxon & Dawson. The family would like to give special thanks to medical professionals at AdventHealth and Cornerstone Hospice for their care. Memorial donations may be made to your local EMS or VFW Post #8087. Funeral services will be held at Lakeside Memorial Gardens, Eustis, FL on Saturday, January 23rd at 12 noon followed by a celebration of life at VFW Post #8087 in Mt Dora, FL.

Stephen Julius Szapor Sorrento, FL. - Stephen passed away on Thursday, January 7th at the age of 91. He was born in Passaic, NJ & was of Hungarian & German descent. He lived & worked in northern and southern New Jersey for most of his life... View Obituary & Service Information

The family of Stephen J. Szapor created this Life Tributes page to make it easy to share your memories.

Send flowers to the Szapor family.