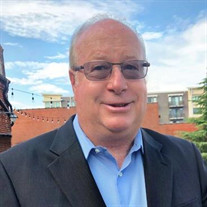 Robert P. Wooten of Mount Dora, Florida passed away on Tuesday, December 3, 2019, at the age of 62. He was born to Claire & Ralph Wooten on July 5, 1957 in New Haven, Connecticut. He attended Langley High School in McLean, VA. His passion for flying started early and motivated him to obtain his pilot's license at the age of 17. He moved south to attend Embry-Riddle Aeronautical University in Daytona Beach, FL. Upon graduating he moved to Fort Lauderdale, FL and started Lance Aviation where he was an aircraft mechanic for 10 years. He then transitioned to work in the cell phone industry starting with Microcell which relocated him and his family to Central Florida. He worked a majority of his cell phone career with Nextel and Sprint, but ended with T-mobile which he often spoke highly of their care of their employees. He is survived by his wife Michelle Wooten together for 37 years, daughter Jeanne and her husband Matt Hackler, son Richard Wooten, daughter Hye Jung Kim (Kimmie), two granddaughters Scarlett and Violet Hackler, and sister Gail Votaw, her husband Marty Votaw, and niece Olivia. Brother-in-law, Ted Salois and wife Yuko, nieces: Rosanna and Momo, in California, nephew Jake, sister-in-law Jeanne Dolson and husband Jim with nieces Jamie, Jena and Joni and nephew Jimmy, in South Carolina. Robert was a loving and fun father, husband, grandfather, and friend. Robert was always the first one to be called when any of the kids, family, or friends had any mechanical issues and he always was kind and patient to not only help, but to guide and teach them the details. He was always there to help friends and family with household projects, electrical needs, cars, motorcycles, and whatever else people needed from him. Also, in his garage, he has numerous passion projects of his own happening simultaneously which have now become his wife Michelle’s projects. He enjoyed time with his children and grandchildren. He would bend for any request Scarlett had from wrestling on the floor and letting her ride him like a horse to making her feel like the best assistant when he worked on his projects if she wanted to be outside with him. He taught all of his kids the importance of basic car maintenance. Kimmie knows how to change her brake pads and to “be careful or she’ll lose an eye.” Jeanne knows how to change her oil and rotate her tires. Matt knows how to change a clutch in a car. Rickey knows how to change a thermostat. He would share evenings with Kimmie when she got off of work and they’d debrief their days together. He would attend Rickey’s swim meets and spent hours working on motorcycles with him. He went to many of Jeanne’s horse shows. Later his time spent with her was mostly coaching her through many house projects or to spend time with the grandkids. He took his wife Mickey out to dinner at least one night a week. Often times they went to their favorite local spot, Fiesta Grande. Robert made sure all their favorite shows would be recorded and that there was the best speakers set up for when they watched The Voice and American Idol. Robert liked to pretend he was actually in the audience and would turn the volume up when each person performed. He was wonderful at making sure anything Mickey dreamed of, she had. There have been convertibles, a large sewing space, and even a Spartanette to refinish for Mickey to camp in. He was truly the best to all of us and he will be greatly missed by many. A special thank you to a valuable member of our support team, Denise Croy, a long time family friend and neighbor who hasn’t left our side for each difficult step of this past week. The many people who assisted in Robert’s care during his final days at Advent Health deserve many thanks as well.

Robert P. Wooten of Mount Dora, Florida passed away on Tuesday, December 3, 2019, at the age of 62. He was born to Claire & Ralph Wooten on July 5, 1957 in New Haven, Connecticut. He attended Langley High School in McLean, VA. His passion... View Obituary & Service Information

The family of Mr. Robert Porter Wooten created this Life Tributes page to make it easy to share your memories.

Send flowers to the Wooten family.