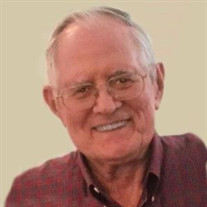 Robert G. Clark (Bob) of Leesburg, Florida, beloved husband, father, and grandfather, passed away August 7, 2021. Robert was born August 31, 1936 in Loudoun County, Virginia to Macil and Harry Clark. He graduated from Lincoln High School in Lincoln, Virginia in 1954. Robert proudly served in the United States Air Force where he began his career in Human Resources following graduation from high school. Robert retired from the Air Force in 1975 then returned to work as a civilian at Wright-Patterson AFB. After a combined service of over 38 years with the military/civil service, Robert and Betty retired to Leesburg, Florida in 1993. Robert is survived by his wife of 66 years, Betty; daughter, Belinda (Don) Madison; grandsons, Jonathan (Sarah) Madison and Michael Madison; sister, Dulcie Reed; brothers, Ivan, Henry (Gaye), Thomas (Patti), and Basil (Peggy); sister-in-law, Patricia Clark; and many nieces and nephews. He was preceded in death by his father, Harry Lee Clark, mother Macil Anna Core Clark, and brother, Charles Clark. A Celebration of Robert’s Life will be held on Friday, August 13, 2021 at 11:00 AM. Visitation for family and friends will be on Friday, August 13, 2021 from 10:00 to 11:00 AM. Both will be at Steverson, Hamlin & Hilbish Funeral Home, 226 East Burleigh Boulevard, Tavares, FL. Burial will be in Lakeside Memory Gardens in Eustis, FL. Services will be performed by Reverend Gary Blanchard. In lieu of flowers, donations may be made to First Baptist Church of Leesburg, 220 N. 13th Street, Leesburg, FL 34748.

The family of Robert Gilbert Clark created this Life Tributes page to make it easy to share your memories.

Send flowers to the Clark family.