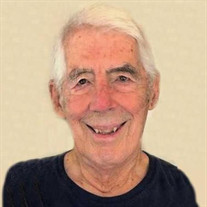 Richard Poole was born in 1931 in Memphis, Tennessee. After spending his youth in Memphis during the '30s, he went on to marry his college sweetheart, Margaret Johnson, with whom he had four amazing children, who then had ten awesome grandchildren, and currently four delightful great-grandchildren. Richard earned his PhD in Botany while living in Gainesville, Florida. After a brief stop in Hawaii, the family settled in Apopka, Florida where Richard spent his entire career performing research in horticulture for the University of Florida. During his career, he traveled extensively helping the international nursery industry improve their growing techniques. After retirement, he continued his travels but enjoyed shifting his focus to his life-long love of birding and nature. In these travels, he had a second chance at love when he met and married a fellow world-traveling nature lover, Christine Brown. Richard lived a full life with many wonderful or at least interesting, experiences which are summed up in his own words below. “Life was good, no, great. Yes, there were some hiccups. If anybody told that skinny kid in Memphis that just flunked tenth grade the things he would do, people he would meet, places he would go. No way! He has four kids he can brag about. Kicked Orlando Gun Club out of Magnolia Park, one of his favorites. 1984 Service to Mankind Award from Sertoma, one of the most surprising. The people he would meet. Chief of African tribe in Ghana, lunch with county commissioner, only a few. Places he would visit. Six continents, forty countries and fifty states. Yes, many great memories! Far exceeded expectations.” For those intrigued to hear more, Richard used his professional writing skills to capture the most interesting tales in written stories in a book titled, The Adventures and Misadventures of Richard Poole. The book is available on Amazon. A gathering of family and friends for Richard is scheduled for Thursday, September 30th at 10:30 AM at Brooksville Cemetery, 1275 Olmes Road, Brooksville, FL. A little ditty Richard shared with his family to express his philosophy on life. I'm going to live til I die, I'm going to laugh til I cry. I'm going to fill my cup until my number's up. I'm going to live, live, live until I die.

Richard Poole was born in 1931 in Memphis, Tennessee. After spending his youth in Memphis during the '30s, he went on to marry his college sweetheart, Margaret Johnson, with whom he had four amazing children, who then had ten awesome grandchildren,... View Obituary & Service Information

The family of Richard Turk Poole Jr. created this Life Tributes page to make it easy to share your memories.

Richard Poole was born in 1931 in Memphis, Tennessee. After spending...

Send flowers to the Poole family.