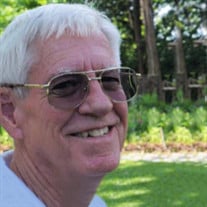 Michael Steven McMahon, 73, of Eustis, FL passed away peacefully on June 30th, 2021 with family by his side. Mike was born in Orlando, FL, the son of Robert and Bernita McMahon. Mike was preceded in death by both of his parents. Mike was a graduate of Eustis High School, class of 1965, and has remained close friends with many of his classmates. He is also a proud alumnus of Florida State University, “Go Noles!” and Rollins College where he received his MBA. Mike is a veteran of the Vietnam war where he proudly served as a pilot in the United States Army, achieving the rank of Captain. Mike’s love of flying continued after the Army, when he began to fly commercially for several years. He also worked with the Florida Forest Service and was a member of the National Guard. His love of flying emanated out of him. Mike was also an avid reader and had a vast library of books. He also loved listening to music, watching movies and sparking up conversation with others when going out to eat. He made friends wherever he went. Mike also loved travelling, he once rode his bike from Florida to Virginia, stopping at campgrounds along the way. It was the adventure of a lifetime for him along with his trip to Australia. As his son Sean would say, he was a “cool dude” and will be greatly missed. Mike is survived by his sons: Robert McMahon, Los Gatos, CA, and Sean McMahon, Sanford, FL; his daughter: Amy McDaniel, Pensacola, FL; his grandchildren: Brooke Graham, Meghan McMahon, Joshua McDaniel and Kyle McMahon; his great grandson: Owen Graham; and his brothers: Greg McMahon, Terry McMahon and Jeff McMahon; and several nieces and nephews. A memorial service for family and friends of Mike is scheduled for Friday, July 30th at 4:30 PM at Steverson, Hamlin & Hilbish Funeral Home, 226 E. Burleigh Blvd., Tavares, Florida 32778. Online condolences, memories and photos may be left at www.steversonhamlinhilbish.com

Michael Steven McMahon, 73, of Eustis, FL passed away peacefully on June 30th, 2021 with family by his side. Mike was born in Orlando, FL, the son of Robert and Bernita McMahon. Mike was preceded in death by both of his parents. Mike was a... View Obituary & Service Information

The family of Michael Steven McMahon created this Life Tributes page to make it easy to share your memories.

Send flowers to the McMahon family.