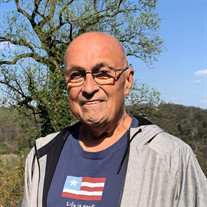 Lon William Howey, age 74, born Pontiac, Michigan died February 21, 2022.  Lon is preceded in death by his parents, Robert “Ole Bob” and Rosemary “Rhody” Howey.  Lon is survived by his wife of 38 years, Susan, daughter Julie, brother, R. Michael (Joanne) Howey, sister Lynn (Mike Krause) Howey, nieces Meghan C. L. Howey (Melissa Howey Clark) and Cora Howey (Matt Giles), beloved sister-in-law Shirley Shankle, and a plethora of friends. Lon was raised in Clarkston, Michigan and a long-time transplant to Ohio, but always - Go Blue! He was born on Flag Day and patriotically supported the flag, his local community, and country. Lon served as the Treasurer for the Pickerington Lion’s Club for 4 years. He received the Melvin Jones award in 2017 He was kind, gentle, generous, and funny. Those who knew him would likely say he could be a bit of a rascal and have a story to back it up. Lon brought a smile to everyone because he could always find the humor in life’s mundane experiences and was quick to throw out a quip. He loved to think of jokes to play on people. He also was quick with a kind word, thanking people and letting them know how much he appreciated them. Anyone who knew Lon became a better person because of it. Lon was a mentor to many and generous with his time. Lon loved baseball, woodworking, driving in convertibles and his family. Lon faced his healthcare challenges with optimism and grit. In lieu of flowers and in honor of Lon and Susan’s mothers, please consider donating to an Alzheimer’s non-profit. https://webcast.funeralvue.com/events/viewer/69852

The family of Lon William Howey created this Life Tributes page to make it easy to share your memories.

Send flowers to the Howey family.