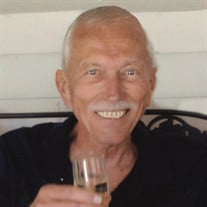 Leon William Uhlman, age 76, passed away on April 4, 2022 after fighting a long battle with lung cancer. He was born in Beatrice, Nebraska on April 23, 1945. Leon attended the University of Nebraska and later moved to Orlando, Florida in 1967. His first job in Orlando was with Reynolds Aluminum and he remained with them until his retirement in 1997. Before retirement he spent years traveling the Midwest as their Operations Control Manager. After retirement he spent many years traveling the United States enjoying his love of the outdoors, visiting and working in many of our state parks. He is survived by his son, Eric (Sharon) Uhlman of Johnson City, TN., Brother Lewis A. Uhlman of Leesburg, Florida, Sister Carol (Daniel) Duitsman of Eustis, Florida, Grandson Dustin Uhlman of Port St. Lucie, Florida, Grandson Lucien Uhlman (Joy) of Lakeland, Florida, Grandson Eric Uhlman, II of Johnson City, Tennessee, nieces and nephews, and lastly, former husband of Cindy (nee Flynn) Valez. Leon and Cindy were blessed to have maintained a long and lasting friendship that endured for nearly 54 years. Leon was the greatest of friends to all that knew him and was always there for anyone who needed a helping hand. He cherished his love of family and enjoyed any and all times spent with them. Leon represented the good that we all need every day in our lives. His kindness and spirit will continue to surround all of us and he will be deeply missed by many. Leon’s wishes were to have no public service or viewing. Rather, he wanted all that knew and loved him to celebrate his life in your own personal and/or private way. His remains will be cremated and scattered among his favorite places. Arrangements have been entrusted to Steverson, Hamlin & Hilbish Funerals and Cremations, 226 E. Burleigh Blvd., Tavares, Florida 32778, 352-343-4444.

Leon William Uhlman, age 76, passed away on April 4, 2022 after fighting a long battle with lung cancer. He was born in Beatrice, Nebraska on April 23, 1945. Leon attended the University of Nebraska and later moved to Orlando, Florida in 1967.... View Obituary & Service Information

The family of Leon William Uhlman created this Life Tributes page to make it easy to share your memories.

Send flowers to the Uhlman family.