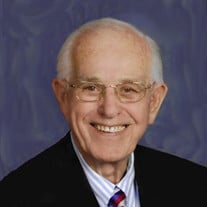 Harold “Hal” Whalen passed peacefully on Sunday, February 23, 2020 into the welcoming arms of his Savior Jesus. He was born in Freeport, NY, to Harold Sr. and Evelyn Post Whalen on February 2, 1932, the oldest of 5 children. He was born again at Word of Life Bible Camp, Schroon Lake, NY, in 1944 at the age of 12. Harold grew up and attended schools in Babylon and Deer Park, NY, graduating from Babylon High School in 1949. Shortly after graduation Harold joined the U. S. Navy, and was trained as a Storekeeper in the Navy’s Submarine Force. He was stationed in New London, CT, and later in Key West, FL serving with Submarine Squadron Twelve aboard the Submarine Tender, USS Bushnell (AS-15). While on shore leave visiting his parents in Stuart, FL, Harold met the love of his life, Evelyn Reitz. Harold and Evelyn were married in May 1953, and bought their first home together in the Pine Manor neighborhood in Stuart. Soon after his honorable discharge from the Navy, Harold began his near 40-year career with Florida Power and Light in the Stuart area. Harold and Evelyn raised two boys, Harold III (Rollie) and David, in Stuart, FL. They attended kindergarten at the United Methodist Church in Stuart where Evelyn taught for sixteen years, and continued their education through Martin County public schools graduating from Martin County High School. The Whalen family were faithful members of First Baptist Church in Stuart until the boys graduated from High School and Harold and Evelyn relocated to the Jensen Beach area. Harold retired from Florida Power and Light in 1993 and they ventured north to settle in the beautiful community of Howey-in-the-Hills, FL, and later relocated to nearby Tavares. They were active members of Adventure Christian Church in Tavares. Harold enjoyed anything outdoors – pontoon boating on the St. Lucie River, playing slow-pitch softball in the local church leagues, summer camping in North Carolina, and spoiling his grandkids with regular visits to Disney World. He also enjoyed spending time with good friends – dinners out at a favorite restaurant, a card game or two, or a short cruise to the Bahamas or the Caribbean. Harold also loved to dance, and he and Evelyn made quite the pair jitterbuggin’ whenever and wherever the mood struck him. But his most favorite times always revolved around his family. Both the Whalen boys moved away from the Stuart area after high school, so Harold and Evelyn spent a lot of time in the car or on airplanes going to visit kids and grandkids. Affectionately known as Pepa, the grandkids always had a lap to curl up on or a bit of rough-housing or “jibbie-jobbies” as needed. Harold is survived by his wife of 66 years, Evelyn, his younger brother, Don (Connie) of Stuart, FL, his younger sister, Sharon Greenlees (Charlie) of Stuart, and his two sons, Rollie (Vicki) of Jensen Beach, FL, and David of Sun City, AZ, six grandchildren, and seven great-grandchildren.

The family of Harold R. Whalen Jr. created this Life Tributes page to make it easy to share your memories.

Send flowers to the Whalen family.