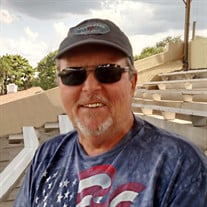 Dennis D. Hall of Howey-in-the-Hills went to be with the Lord April 7, 2022, after a long illness. Dennis was born October 24, 1947, in Madisonville Kentucky to Bernice Helen (Murphy) Hall and D. C. Hall Jr. He was a graduate of University of Illinois at Urbana-Champaign with a degree in Business. He married Tara L. Frazier on September 21, 1996; they have resided in Florida for the last 25 years. Upon graduating college, he began a career with Peabody Coal. During his time at Peabody, he was sent to Arizona where he taught Hopi Indians how to mine coal efficiently allowing them to become self-supporting. Another assignment for Peabody took him to Washington DC to help negotiate the reclamation of coal mining lands to become ecologically functional after the coal was extracted. In 1982 he and his father started Orange Sooner Corporation a coal lands leasing business in Florida. After the sale of Orange Sooner Corporation Dennis earned his real estate and his stockbrokers license in Vero Beach, Florida. During this time Dennis also was a mentor at the local high school and later was an Adjunct professor at Indian River Community College. He served in the Exchange Club of Indian River for many years and served as Vice President before relocating to Howey-in-the-Hills. Dennis was an avid sports fan with a special interest in college football and major league baseball. Dennis began playing golf when he was six years old and enjoyed the game until his health became an issue. He was on the Madisonville high school state championship golf team. Golf was truly his first sports love, he enjoyed giving instruction to his friends and anyone that asked for pointers. He also loved to go deep sea fishing while spending quality time with his father on the ocean. Other sport interests including waterskiing, bowling, pool, basketball, and scuba diving. Dennis had a very strong relationship with our Lord and was fifth generation Church of Christ. He loved to share the gospel with anyone who was interested. While at the Vero Beach Church of Christ, Dennis earned the nickname Barnabas as he was a wonderful encourager to so many. He participated in many activities as a member of the congregation in Vero Beach including manager of the care house. After moving to Lake County, he attended the Mount Dora Church of Christ for twelve years and the last three to four years the South 14th Street Church of Christ. Dennis lived a full and fruitful life, he made friends easily, was a masterful conversationalist. Could talk endlessly on many different subjects with anyone. His pleasant demeaner made him very easy to approach with questionings or when seeking advice. He will be sorely missed by all who knew him. Dennis is survived by his wife Tara, his sister Darla Furst and her husband Bill, their daughters Jessica, Emily and their children. Stepmother Naomi Hall and two stepsisters; Debra Whitchurch and JoElla Gotcher and families. Best Friends; Chris Creith, Bill McMackin, Clay Humphries, David Grimes and Steve Watson. And his faithful furry friends. In leu of flowers please donate to your local Humane Society or Animal Shelter. There will be a celebration of life service on Friday, April 15th, 2022, at the South 14th Street Church of Christ at 2pm. Online condolences can be left at www.steversonhamlinhilbish.com

Dennis D. Hall of Howey-in-the-Hills went to be with the Lord April 7, 2022, after a long illness. Dennis was born October 24, 1947, in Madisonville Kentucky to Bernice Helen (Murphy) Hall and D. C. Hall Jr. He was a graduate of University... View Obituary & Service Information

The family of Dennis Dee Hall created this Life Tributes page to make it easy to share your memories.

Dennis D. Hall of Howey-in-the-Hills went to be with the Lord...

Send flowers to the Hall family.