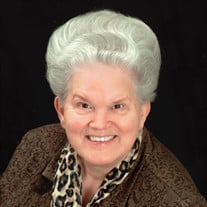 Carol Jean Preece was born in Hode, Kentucky on March 3, 1934 to the late Carmel Messer and Homer Hensley. She entered Heaven’s gates on March 5, 2020. For the last 36 years, Carol resided in Tavares, Florida and was affectionately known as Nan Nan to many. A consummate mother and homemaker, Carol was the CEO of a corporation of nine. Over her 86 years she wore many hats including daughter, sister, wife, mother, grandmother, great-grandmother, teacher, counselor, doctor, psychiatrist and referee but, most importantly, the family prayer warrior. Carol had an unwavering faith in God. She left a lasting impact on all she met, regardless how brief the encounter. Her innate ability to incorporate God and his love into all aspects of life was only matched by her flawless hair style. An ardent student of God’s word, Carol taught an adult bible class and worked tirelessly to accomplish God’s plan for her life. She attended the Zellwood Church of God. Carol was preceded in death by her husband of 43 years, James Alex Preece, her mother Carmel Messer, step-father Smokey Bryant Messer, father Homer Hensley, son Hode Edward Kirk, granddaughter, Heather Sueanne Quesenberry, grandson Klay Kirk and oldest brother Hodivah Hensley. Carol is survived by her son Tyson Edward Preece, son Michael Dean Kirk and wife Kim, daughter Linda Susan Messer and husband Carter, James Alex Preece II, daughter Sheila Dawn Stepp and husband Tom, son Bruce Hensley and wife Jane, daughter Melanie Carmel Preece, daughter Andrea Kennard and husband Duke, her baby brother Dale Hensley and wife Thelma, sister-n-law Bonnie Jean Hensley and daughter-n-law Judy Kirk. Carol was blessed with 16 grandchildren and 16 great-grandchildren. The family gives their greatest gratitude to the Compassionate Care Hospice Team, Leanne, Kim, Leah & John and CNA, Michelle for lovingly caring for Carol during her last days. Special thanks to her minister, Reverend and Mrs. Joe Brockman, who lovingly ministered to her till the very end. The family will receive friends and family on Saturday, March 28, 2020 from 11am to 1pm followed by a Celebration of Life @ 1pm to be held at the East Kermit Church of God, 337 Route 52, Kermit, West Virginia, Carol’s home church. Memorial donations can be made in lieu of flowers to the Zellwood Church of God, 5213 King Avenue, Zellwood, Florida, 32798. Eye hath not seen, nor ear heard, neither have entered into the heart of man, the things which God hath prepared for them that love him, I Corinthians 2:9.

Carol Jean Preece was born in Hode, Kentucky on March 3, 1934 to the late Carmel Messer and Homer Hensley. She entered Heaven&#8217;s gates on March 5, 2020. For the last 36 years, Carol resided in Tavares, Florida and was affectionately known... View Obituary & Service Information

The family of Carol Jean Preece created this Life Tributes page to make it easy to share your memories.

Send flowers to the Preece family.