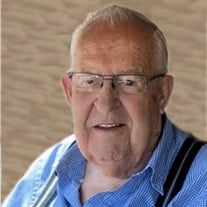 Armand J. Gregoire, 91, died Tuesday, May 4, 2021 at Advent Health Waterman Hospital in Tavares, Florida from complications of renal kidney disease. His daughter, Debra, was at his bedside as he peacefully departed. He was a resident of Georgia, Vermont for many years and a full-time resident of Leesburg, Florida for the past eight years, Mr. Gregoire owned and operated, along with his Son, Michael, Armand’s Auto Sales on the Swanton Road. Armand was in business for over forty years retiring at the age of 75. He had other enterprises including a car wash, fuel business, case tractor franchise and a garage/repair service. He was talented in any fix-it job. He was a life member of the Elks Lodge. His pastimes included bowling, golf, card playing and bingo. Dining out was also a great pleasure to him as Sunday’s he was off to Billy’s Restaurant for his weekly strawberry waffle. Born in Georgia, Vermont on December 26, 1929, he was the son of Germain and Alice (Trudeau) Gregoire. His wife Janet predeceased him in 2017 after 58 years of marriage. His family includes a daughter Debra A. Huntoon of Leesburg, Florida, her companion Michael Therrien of Manchester, New Hampshire, a son and daughter-in-law; Michael and Kathleen Gregoire of St. Albans, Vermont, a brother and sister-in-law, Maurice and Rosemary Gregoire of Tilton, New Hampshire, sister-in-laws; Sally Lemnah of St. Albans, Vermont (Gordon Lemnah deceased), Kathryn Burda of Avenel, New Jersey (Thomas Burda deceased, John Lemnah deceased) and David and Suzanne Lemnah of The Villages, Florida. Armand leaves brother-in-laws; Courtland La Vallee of Buffalo, New York and Robert Holcroft of California. His two sisters predeceased him-Mrs. Germaine Webb of North Carolina and Mrs. Annette La Vallee of Buffalo, New York. He also has three grandchildren: Ryan M. Huntoon of Windsor, Vermont, Lauren K. Huntoon of Port Charlotte, Florida and Darik M. Gregoire of St. Albans, Vermont. Special acknowledgement to kind neighbors in Florida including Skip and Kathy Cornell and Connie Krombel. A funeral high mass will be offered at 12:00 PM on June 26, 2021 at Holy Angels Church on Lake St. in St. Albans, Vermont. Burial will follow services with committal at Holy Cross Cemetery in St. Albans, Vermont for Janet M. Gregoire and Armand Gregoire together. Further information can be obtained online at Steverson, Hamlin & Hilbish Funeral Home of Tavares, Florida

Armand J. Gregoire, 91, died Tuesday, May 4, 2021 at Advent Health Waterman Hospital in Tavares, Florida from complications of renal kidney disease. His daughter, Debra, was at his bedside as he peacefully departed. He was a resident of Georgia,... View Obituary & Service Information

The family of Armand Joseph Gregoire created this Life Tributes page to make it easy to share your memories.

Send flowers to the Gregoire family.