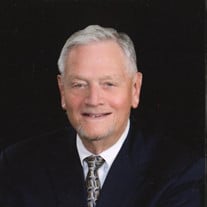 William T. Knowles William “Bill” T. Knowles, a beloved husband, father, brother, uncle, cousin, and friend, passed away peacefully at home with his wife and son at the age of 83. Bill was a Florida boy, born and raised in Orlando, Florida. The son of Dr. Harold S. and Donna S. Knowles, Bill served his country proudly in the United States Army and served in Germany for 3 years. After his service, Bill attended and graduated from Florida State University. He then found his career with Allstate Insurance Company and was employed with them for 30 years as a Casualty Claims Manager. When Bill wasn’t working, his love of nature would find him in the great outdoors; fishing, hunting, traveling, and taking cruises were his passions. Bill was an avid sports fan, but most enjoyed watching his Seminoles and Dolphins. Those who knew Bill would describe him as a loving father and devoted husband who was humorous, dedicated, loyal, friendly, and dependable. He was also a wonderful communicator. Bill was predeceased by his brother, Harold “Hal” S. Knowles; and his brother-in-law, Dan P. Black. He is survived by his beloved wife of over 46 years, Louise B. Knowles; son Steven T. Knowles; sister Pat K. Black; sister-in-law Leanne Knowles-Fender, widow of Hal Knowles, now married to Denny Fender; many cousins, nieces, nephews, grand-nieces and nephews, and a great-grand-niece and nephew; many relatives in Canada; and many friends. A gathering of family and friends for Bill is scheduled for Sunday, March 14th from 5-7 PM at Steverson, Hamlin, & Hilbish Funeral Home, 226 E. Burleigh Blvd., Tavares, Florida 32778. A Mass of Christian Burial is scheduled for Monday, March 15th at 9 AM at St. Patrick’s Catholic Church, 8803 Old Highway 441, Mt. Dora, Florida 32757 with Father Charlie officiating; the Mass will be live streamed to the church’s website for those who are unable to attend. Bill’s place of rest will be with his comrades in arms at Florida National Cemetery, Bushnell, Florida following a private ceremony. In lieu of flowers, donations in Bill’s honor can be made to Cornerstone Hospice 2445 Lane Park Rd., Tavares, FL 32778 (866)-742-6655.

William T. Knowles William &#8220;Bill&#8221; T. Knowles, a beloved husband, father, brother, uncle, cousin, and friend, passed away peacefully at home with his wife and son at the age of 83. Bill was a Florida boy, born and raised in Orlando,... View Obituary & Service Information

The family of William T. Knowles created this Life Tributes page to make it easy to share your memories.

Send flowers to the Knowles family.