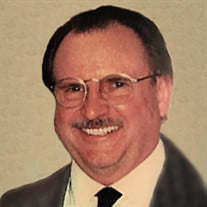 Thomas (Tommy) Edward Jasionowski fell asleep in Christ on Saturday, April 23, 2022 at the age of 84 years and now awaits the resurrection of the dead which was his earnest hope in Christ Jesus. Tommy was born in Spring Hill, West Virginia on October 14, 1937 to his parents Louis T. and Genevieve M. Jasionowski who both pre-deceased him. After WW2, his family relocated to Orlando, Florida where he grew up. He graduated from Edgewater High School in Orlando and then joined the United States Marine Corp and served until his honorable discharge in 1958. Tommy had an interest and talent for art and painting, and in May of 1959, he went to work as a sign painter for Tupperware Home Parties, Inc. in Kissimmee, FL for what he thought was a temporary job at the company’s annual Jubilee sales conference. He was blessed, however, as he ended up employed by that wonderful company for 34 years as its graphic design and art director. Tommy was a very creative individual and a natural leader, as many who worked with him would testify. He had a unique talent for blending the artistic and design side of Tupperware with the business side of the organization. But all was not business as it was there at Tupperware that he would meet a beautiful young lady, Billie Jo Brockman, who he married in 1964. As an exceptional artist, Tommy enjoyed painting hundreds upon hundreds of watercolors and oil paintings over the course of his life, some of which decorate the walls of his home in Howey in the Hills, FL. He was blessed to retire to Howey in 1993 where he enjoyed his painting and traveling, his two wonderful grandchildren, and his grapefruit grove, all alongside Billie Jo. His final years were spent caring for Billie Jo, who in 2011 was diagnosed with brain cancer. His dedication to her care was an inspiration to many. Throughout his adult life, Tommy was an avid student of the Bible and was a member of the Orlando Christadelphians (Brethren in Christ) and was baptized into the one hope of the resurrection in Christ Jesus in 1958. Tommy is survived by his wife of 57 years, Billie Jo Jasionowski, his daughter, Tammy Jasionowski of Albuquerque, NM, and his son, Michael T. Jasionowski and daughter-in-law, Victoria, of Gainesville, FL. He is also survived by his two sisters, Sue Smith and Linda Jenkins, both of Orlando, FL. He was blessed with two grandchildren, Emmaline Wolfe of Temple, TX and Michael Jr. of Gainesville, FL, along with many other friends and family. Services will be held graveside on Thursday, May 5, 11:30 A.M. at Taylor Memorial Cemetery, State Road 19, Howey in the Hills, FL. Online condolences can be left at www.steversonhamlinhilbish.com

Thomas (Tommy) Edward Jasionowski fell asleep in Christ on Saturday, April 23, 2022 at the age of 84 years and now awaits the resurrection of the dead which was his earnest hope in Christ Jesus. Tommy was born in Spring Hill, West Virginia... View Obituary & Service Information

The family of Thomas "Tommy" Edward Jasionowski created this Life Tributes page to make it easy to share your memories.

Send flowers to the Jasionowski family.