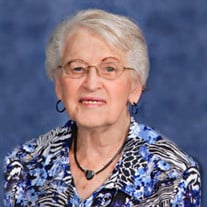 Sarah (Carter) Keith went to be with the Lord on May 24, 2020 in Eustis, Florida due to natural causes. She was a loving wife, mother, grandmother, great grandmother and a friend to all. She was born on April 5, 1929 in Newton, North Carolina. At the time of her passing, she was 91 years young. Sarah was the last to pass of a large family consisting of six boys and two girls. Her parents, Harry and Sarah Carter, raised their family as hard working Christians in rural North Carolina during the Great Depression. As a youth and as a young woman she enjoyed sewing, cooking, and socializing. During her senior year of school she caught the eye of a young and dashing E.B. Keith. He looked at her and she returned his glance with a smile and that’s all it took according to E.B. The two were married on May 30, 1947, at the First Baptist Church in Sanford, North Carolina. The two lovebirds enjoyed spending time together and with family. On November 4, 1950 the couple were blessed with their first child, Laura. In April 1953, Sarah and E.B. moved to Apopka, Florida to raise their family in Central Florida. On April 3, 1955, they had another child, James, who passed on April 5, 1955 from a neonatal death. On April 28, 1956 they were blessed with their third child, Larry. Sarah enjoyed being a wife and mother. She was the consummate housewife and took great pride in cooking, cleaning, and raising a family. She also returned to work as a bookkeeper for LCTinsley Scales Company. In her spare time, Sarah enjoyed handmade crafts, sewing, playing BINGO, and square dancing with E.B. She also taught Sunday School, sang in the Choir, and was elected President of the Women of the Church at John Knox Presbyterian Church, Orlando, Florida. Later in life, her and E.B. purchased a Recreational Vehicle and traveled throughout the Continental United States and Canada sightseeing; visiting family and friends; and square dancing. The couple continued their passion for travel until they sold their RV in 2015. Sarah also enjoyed being a grandmother and great grandmother. Her daughter Laura and her husband Marvin “Tex” Tanecka blessed Sarah and E.B. with four grandchildren and seven great grandchildren. She also recently learned that she would soon be a great great grandmother. Her Christian morals and strong work ethic made her an extraordinary role model, not only for her own offspring but for all women. At the time of her passing, Sarah and E.B. were six days away from celebrating their 73rd Wedding Anniversary. Sarah is preceded in death by her parents: Harry and Sarah Carter; and her brothers and sister: Walter Carter, William “Raymond” Carter, Joseph “JB” Carter, Robert Carter, Albert “AC” Carter, Harry “Harry Glen” Carter, and Betty Jackson; and her sons James and Larry Keith. Sarah is survived by her husband: E.B., her daughter and son in law: Laura and Tex Tanecka. Her surviving grandchildren and their families include: Natalie Vines, husband Brian Vines, and stepson’s James Vines and Mark Vines; Rachel Naron and her husband Brad Naron and children Ashley Brugger, Chad Brugger, and Nicholas Brugger; Naomi McKnight and children Trey Tomlinson and Blair Tomlinson (expecting any day); and Matthew Tanecka and son Tyler.

Sarah (Carter) Keith went to be with the Lord on May 24, 2020 in Eustis, Florida due to natural causes. She was a loving wife, mother, grandmother, great grandmother and a friend to all. She was born on April 5, 1929 in Newton, North Carolina.... View Obituary & Service Information

The family of Sarah C. Keith created this Life Tributes page to make it easy to share your memories.

Send flowers to the Keith family.