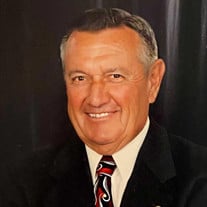 Ronald G. Fox Sr. of Tavares, FL passed away Friday, December 31, 2021 at the age of 80. Ron died peacefully at home with his high school sweetheart Phyllis by his side. Ron was born in Waukegan, IL to Gerald and Shirley Fox. Ron graduated from Joliet Catholic High School (Joliet, IL 1960). He had a work ethic like no other and was a true entrepreneur. He moved to Indiana and established Fox Pools of Indianapolis in 1979 and continued to work until 2020 when his family finally convinced him to retire and move to Florida. But even in retirement, Ron found a way to continue working by volunteering his time at Deer Island Golf Course. Ron was a member of the American Legion Band (saxophone), 4th degree in the Knights of Columbus, and faithful member of St. Patrick’s Catholic Church in Mt. Dora, Florida. Ron had many passions but three preceded the others: his faith, his family, and the daily ritual of mowing his lawn. Ron took pride in his faith, and based all his actions and decisions on the word of God and led others to Christ in doing so. Beyond his love for his wife, he demonstrated his love for his children, his grandchildren, and his great grandchildren by attending school, sporting, and life events. Ron was the most present, sacrificial husband, father and grandfather he could be. Ron loved being surrounded by people and bringing them joy. He would find the most absurd ways to fill rooms with laughter whether it was his witty humor, Donald Duck impressions, or sharing a joke, he had an undying love to make people smile. Ron was preceded in death by his parents, younger brother Scott and son Jeffrey (2020). He is survived by his wife Phyllis Ann (Hylka) Fox and brother Jerry (Val) Fox; children Ronald Jr. (Cheryl) Fox and Christine (Matthew) Leinheiser; grandchildren Jamie Fox, Wesley Fox, Tyler Fox, Torey (Clint) Heuer, Taryn Fox, Zachary Leinheiser, Sarah (Adam) Sibert, Caleb Leinheiser; great grandchildren Kylie Fox, Jordyn Mithoefer, Emmett Heuer. People wishing to honor Ron’s lifelong commitment to family and community can make donations to the American Cancer Society in his late son Jeff Fox's name. A Celebration of Life will be held at a later date. Online condolences can be left at www.steversonhamlinhilbish.com

Ronald G. Fox Sr. of Tavares, FL passed away Friday, December 31, 2021 at the age of 80. Ron died peacefully at home with his high school sweetheart Phyllis by his side. Ron was born in Waukegan, IL to Gerald and Shirley Fox. Ron graduated... View Obituary & Service Information

The family of Ronald Gilbert Fox Sr. created this Life Tributes page to make it easy to share your memories.

Send flowers to the Fox family.