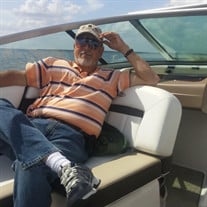 Philip Warren McDowell of Sheridan Indiana passed away May 1st 2020 while visiting family in Florida. Philip was originally from Lake County Indiana. After marrying Lorretta Harger, they moved to Noblesville Indiana and later retired outside of Sheridan Indiana. Philip was born on January 19, 1947 to Arthur and Joan McDowell in Gary Indiana. Philip was a 1965 graduate of Hobart High School. Soon after graduation, while in the Army, Philip served a tour of duty in Viet Nam. After his service in the military, Philip went to work at Western Electric which later became known as Lucent Technologies. Philip retired after 30 years of installing AT&T equipment to Indiana and Illinois Bell. Philip attended Cicero Indiana United Methodist Church. He was a life member of the Good Sam RV Club and he also volunteered for the Relay for Life Cancer Walks in Noblesville Indiana. In addition to his parents (Arthur and Joan McDowell) Philip was preceded in death by his wife of 25 years, Loretta (Harger) McDowell. He is also preceded by his Brothers, John, Bradley, and Bruce McDowell. He is survived by his Son, Scott McDowell of Central Florida; Daughter, Mellissa (Woody) Brazill and Grand Daughter, Kaitlyn Nelson, of Leesburg Florida. He is also survived by his Sister, Kathy (Byron) Buhr of Jefferson City Missouri. Sister-in Laws: Rose Mary (Bruce) McDowell of Goshen Indiana, Ans (Bradley) McDowell of St Charles Illinois, and Juanita (John) McDowell of Highland Indiana, Brother in Laws: Ritch Harger and Mike Blackburn of Indiana. Philip is also survived by ex-wife, Linda Spencer Snell of Florida, several Cousins, Nieces and Nephews. Date for Indiana Memorial and Grave Side Services is still to be determined because of current social gathering restrictions. Please check back to this website for updates regarding services. In lieu of flowers, memorial contributions may be made to Cornerstone Hospice of Lake County Florida or a Hospice facility of your choice. Arrangements have been entrusted to Steverson, Hamlin & Hilbish Funerals and Cremations, 226 E. Burleigh Blvd., Tavares, FL 32778, (352)343-4444. Online condolences may be left on the Tribute Wall at www.steversonhamlinhilbish.com

Philip Warren McDowell of Sheridan Indiana passed away May 1st 2020 while visiting family in Florida. Philip was originally from Lake County Indiana. After marrying Lorretta Harger, they moved to Noblesville Indiana and later retired outside... View Obituary & Service Information

The family of Philip Warren McDowell created this Life Tributes page to make it easy to share your memories.

Philip Warren McDowell of Sheridan Indiana passed away May 1st...

Send flowers to the McDowell family.