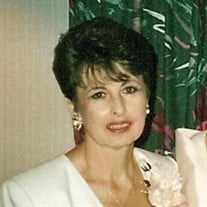 Patricia Mae Minsch, 83, passed away on Saturday, March 20, 2021 in Tavares, FL. Patricia was born on April 17, 1937 in Le Mars, Iowa to Lillian Mae Hix and Albert D. Hix, both of whom predeceased her. Two daughters also predeceased her; Tricia Ann Minsch, age 7 on October 17, 1968, and Deborah Lynn Kofmehl, age 55 on January 21, 2019. Patricia’s two siblings (Nancy Lee Anderson and Alan Dean Hix) also predeceased her. Patricia Mae Hix married Robert Minsch in Seattle on December 23, 1958. Survivors include Robert, of the home, and one daughter, Rebecca Kathleen Boyce and three grandsons, all of the Central Florida area, and a brother, Steven Robert Hix of Camas, WA. Patricia was a 1955 graduate of Lake Washington High School in Kirkland, WA. Patricia continued her education with business training courses, and then entered the banking profession where she enjoyed several years of success. After marrying, she joined her husband “Bob” in Frankfurt, Germany, where he was serving in the U.S.Army. She spent 12 months in Germany and was able to travel to various parts of western Germany, France and Austria. Upon reentering the United States she returned to the banking industry. With the birth of her first child (Tricia) in July, 1961, Patricia became a full time Mother and in Tricia’s case, an excellent nurse. Tricia was premature and required numerous stays in Children’s Orthopedic Hospital in Seattle, and included four surgeries. Patricia founded The Tricia Ann Memorial Guild and did several years of volunteer work for the hospital benefits. Following the years after her other daughters entered elementary school, Patricia volunteered for the North Thurston School District, and for several years served as a reading teacher helping improve the skills of children with reading disabilities. While living in Central Florida, Patricia served as a counselor and coach for The Central Florida Workshop helping young adults with learning disabilities to enter the workplace. Patricia was also an accomplished artist. While living in Lubbock, TX she started a business and produced elegant porcelain figurines which she sold to several upscale outlets. She later continued her artistic endeavors sketching portraits and creating oil and water color paintings of outdoor scenes. Since retirement she and husband and their Maltese, “Mikey”, travelled over 100,000 miles and visited each of the “original 48” and Canada in their “RV”, enjoying the beauty and diversity of this country and its residents. Interment will be in the family plot at Sunset Hills Memorial Park, Bellevue, WA. The family requests that any remembrances be directed to The Seattle Children’s Hospital, 4800 Sand Point Way NE, Seattle, WA 98105 in memory of Tricia Ann Minsch.

Patricia Mae Minsch, 83, passed away on Saturday, March 20, 2021 in Tavares, FL. Patricia was born on April 17, 1937 in Le Mars, Iowa to Lillian Mae Hix and Albert D. Hix, both of whom predeceased her. Two daughters also predeceased her; Tricia... View Obituary & Service Information

The family of Patricia Mae Minsch created this Life Tributes page to make it easy to share your memories.

Send flowers to the Minsch family.