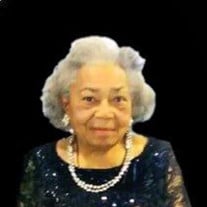 In Loving Memory..... Myrtle J. (Bryan) Robinson entered into her earthly life on May 10, 1924. Her parents were the late James and Pearl Bryan. She had two sisters who preceded her in death-Elizabeth Mercer & Gladys Carter. Myrtle... View Obituary & Service Information

The family of Myrtle J. Robinson created this Life Tributes page to make it easy to share your memories.

Send flowers to the Robinson family.