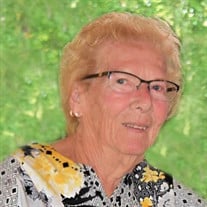 Mary E. Turck, 85, Tavares, Fl and Lowville, NY, passed away peacefully on Saturday, February 13, 2021, at Advent Health Hospital in Orlando, FL. She was born in Lowville on November 20, 1935 to Walter and Norma (Martin) Terrillion. After attending Father Leo Memorial School, she married Thomas Turck on June 27, 1953 at St. Stephen’s Catholic Church in Croghan, NY with the Rev. Fintah Murphy, O.F.M. officiating. They were married for 64 years before Tom’s passing on November 10, 2017. Tom and Mary moved to Lowville where they started their first family business Turck’s Service Station and then later Turck’s AMC/Jeep. Mary served as the office manager for many years. While living in Lewis County, Mary enjoyed bowling on the team sponsored by the family business, was a member of the Watson Home Bureau and a communicant at St Peter’s Catholic Church. In Florida, Mary was an active volunteer in her retirement community. She served as a Board member for the HOA of Imperial Terrace and was a member of the community’s social activities. Mary enjoyed traveling both domestically and internationally, knitting, and spending time with friends’ playing cards and going to Bingo. But most of all, she treasured the time she spent with her children, grandchildren and great grandchildren. Mary leaves to cherish her memory her five children: Wanda Turck and her partner Perry Johnson, Stanwood, WA; Susanne (Jerry) Reed, Leesburg, FL; Thomas, Jr., Lowville; Terry Turck Pardee, Naples, FL; Gary (Kim) Turck, Lowville; ten grandchildren; eight great grandchildren; a sister, Shirley Turck Houppert; a sister in law, Diane Mullin, Lowville; a brother in law, Kevin Turck, Lowville, and brother and sister in law, Joseph and Mary Turck, Croghan. Mary was preceded in death by her husband, Tom; her two brothers in laws, Reginald Turck and Fay Mullin; a sister in law, Elfriede Turck; two brother and sister in laws, David and Bessie Turck, Allyn and Doris Turck; and her step father Aldin Hulbert. Mary will be laid to rest at the Beaches Bridge Cemetery in Watson, NY at the convenience of the family. Memorial contributions can be made in Mary’s name to Hospice, St Peter’s Catholic Church or to a charity of one’s choice.

Mary E. Turck, 85, Tavares, Fl and Lowville, NY, passed away peacefully on Saturday, February 13, 2021, at Advent Health Hospital in Orlando, FL. She was born in Lowville on November 20, 1935 to Walter and Norma (Martin) Terrillion. After attending... View Obituary & Service Information

The family of Mary Elizabeth Turck created this Life Tributes page to make it easy to share your memories.

Send flowers to the Turck family.