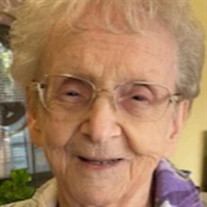 Mary Estelle Edmonds (nee Matney) Born March 29, 1937 in Praise Kentucky and passed September 22, 2021, in Mount Dora, Florida. Mary was the 2nd youngest of four daughters of Lon and Alphie Matney. She married her Navy husband, Hulen, on Christmas Eve of 1956. As a US Navy wife, she spent time in many areas. Stationed on Midway Island, in Long Beach, CA and in Memphis, TN, she made many friends and worked on base at the various PX locations. She also worked in retail during her time in the States. After retiring from Navy life, she and Hulen lived near her sisters in Ohio and finally in Tavares, Florida. They were married for 63 years, quietly enjoying half of it in Florida before his passing on May 24, 2020. Mary will be missed by her nephew, Jerry Church (Kathryn) of Hiawassee, GA, her niece, Sharon Martin (Thomas) of Snellville, GA and her brother-in-law, Harold Church of Eustis, Florida, along with 2 grand-nieces and a grand-nephew. She was preceded in death by her parents and her 3 sisters: Lois Jean Church, Virgie Gay Dales and Patricia Anne Anderson. There will be a private graveside ceremony for the family at Greenwood Cemetery in Eustis, Florida on Friday, October 1st. Steverson, Hamlin & Hilbish of Tavares, Florida are in charge of services for the family.

The family of Mary E. Edmonds created this Life Tributes page to make it easy to share your memories.

Send flowers to the Edmonds family.