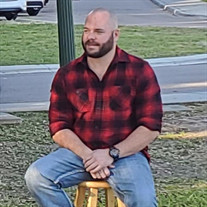 On Sunday, December 5, 2021, Mark Edward Aramino, loving Son, Brother, Nephew, Cousin, and Uncle entered eternal life at age 36. Mark was born on February 15, 1985 in Batavia, New York to Nicholas Francis Aramino and Judith Ann Norris. He graduated from Tavares High School in 2003. He had a passion for cooking and helped Puddle Jumpers open its doors as a Chef in 2015. Aside from cooking he enjoyed sports. Mark loved playing golf, fishing, bowling, singing karaoke and traveling with anyone who was willing to get up and go with him. His favorite team and favorite thing to watch was the Buffalo Bills. He loved meeting new people and built lifelong friendships with almost everyone he met. If you didn’t love Mark, it was only because you had not met him yet. Mark was preceded in death by his grandparents John James Aramino, Margaret Elizabeth Aramino, Wallace Norris and Norma Norris and is survived by his mother, Judith, his father Nicholas, and his stepmother Betty, his brothers Jonathan Douglas Aramino (Mason and Marilana), Adam Christian Aramino (Diane, Danielle, Adam II) Anthony David Aramino (Lahvinna, Arora, Anthony II) and his sisters Nicole Suzanne Aramino (Sophia) and Elizabeth Mary Aramino (Jermy, Reid, Morgan, Ronan) his Aunt Hazel Cooper, Uncles Arthur Aramino and Ronald Norris, and Cousins. A funeral service will be held on Sunday, December 12, 2021 at Steverson, Hamlin, and Hilbish 226 E Burleigh Blvd Tavares, FL 32778. In Mark's memory, in lieu of flowers, to help others who are experiencing similar life-threatening struggles. Here are links to two we can suggest: The National Alliance for Mental Health (www.nami.org); or the National Association for Addiction Professionals: https://us-east-2.protection.sophos.com/?d=naadac.org&u=aHR0cHM6Ly9teS5uYWFkYWMub3JnL2RvbmF0ZS1ub3c_cmVsb2FkPXRpbWV6b25l&i=NWY5OTk1ODQ4M2UzM2MwZTI3YWI5ZGU3&t=TFpkUXlJaFdKZXNkdEZvVENRbyttSGFSek50bVUva3BObnEvQUJvM2Vhaz0=&h=dcefa9906ef84771974cc9c554677073.

The family of Mark Edward Aramino created this Life Tributes page to make it easy to share your memories.

Send flowers to the Aramino family.