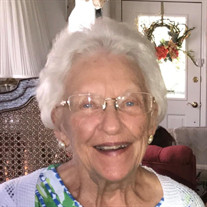 Marion Winnifred O’Neill, age 97, began her New Life in heaven on Gaudete Sunday, December 13, 2020. Wyn, as she preferred to be called, was born on July 10, 1923, to Charles and Edna Closson in Barryton, Michigan. She was the fourth youngest in the family of twelve children. Wyn was preceded in death by her husband, Layton O’Neill, son Patrick O’Neill, son-inlaw, Edward May, son-in-law, Richard Boerman, grandson Christopher O’Neill, grandson-in-law, Richard Mattias, great grandson, Jordan White, as well as her parents and ten siblings. She has one living sister, Joanne Simons in Ludington, MI, Wyn met her husband, Layton while in high school. Layton lived in Big Rapids, Michigan. They met at a dance hall in Chippewa Lake. They were married on June 29, 1943 while Layton was in the service during World War II. They were married for almost 50 years. Layton and Wyn had four children, Regina May, Paul O’Neill (Barbara), Patrick O’Neill and Julie Boerman. They had 14 grandchildren and 22 great grandchildren. They lived in Michigan until 1985 when they moved to Florida. Wyn has resided in Zellwood Station, Zellwood, Florida since 1986. Wyn attended grade school in a one room schoolhouse and went to High School in Barryton, Michigan. She was President of the Senior Class and because of fundraising took a class trip to Washington, DC. She had aspirations of going to Michigan State University and teaching Home Economics but her father informed her there were no funds for that. She was told she had to move out and take care of herself. She had no money but proceeded to find work and cared for her basic needs. She worked in Big Rapids, MI, Midland, MI and Flint, MI where she and Layton were married. Wyn continued to work while Layton was in service of his country in the Army in Indianapolis, IN. She said the men made next to nothing and if she had not gone to work, they would have starved. After the war and with their first child they returned to Michigan from Indianapolis. Layton thought he wanted to be a farmer, which didn’t work out so they moved to Grand Rapids, and he found work at a bank. Wyn was the consummate homemaker and mother. She learned how to cook, sew, and bake from her mother. She made most of the children’s clothing and her own. Wyn converted to Catholicism before she and Layton were married. She was a deeply faithful woman and she, along with Layton, passed the faith on to their children and grandchildren. At different times, Wyn and Layton took in many family members, made each one a part of their household, and helped give them a start in their lives - sisters, nieces, and brothers from both of their families. With loving care, Wyn did their laundry, ironing and fed them along with her own four children. After the children were grown, Wyn worked at a fabric store and then at Sears for ten years before retiring. She also was employed by individuals to do sewing. She made the wedding gowns, bridesmaids, junior bridesmaids and flower girls’ dresses for her daughters’ weddings. She went on to make wedding gowns and bridesmaids dresses for a granddaughter and granddaughter-inlaw, and the wedding gown for a great-niece. Each gown and dress was a work of art. For years Wyn continued to sew, crochet and knit works of art, treasured by family members and friends who received them as gifts. A gifted chef, children, friends, grandchildren and great-grandchildren alike savored her dishes. And her pies! Unmatched in beauty and flavor. While living in Florida, Wyn was a parishioner of St. Patrick’s Catholic Church in Mount Dora. She sang in the choir member for many years, having gained her love of music from her parents. Wyn’s father played the violin and her mother played the piano. Wyn and all of her siblings played musical instruments. Wyn will be greatly missed by all family and all who knew her. Her love for others was strong and tender. She will live on in her loved ones’ hearts and her spirit will be among us forever.

Marion Winnifred O&#8217;Neill, age 97, began her New Life in heaven on Gaudete Sunday, December 13, 2020. Wyn, as she preferred to be called, was born on July 10, 1923, to Charles and Edna Closson in Barryton, Michigan. She was the fourth youngest... View Obituary & Service Information

The family of Marion Winnifred O'Neill created this Life Tributes page to make it easy to share your memories.

Send flowers to the O'Neill family.