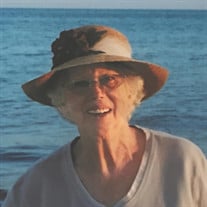 Marie was born on August 3rd, 1930, and raised on the North End of Boston in a cold-water flat across the street from St. Stephen’s Church. Her parents paid $15 dollars a month for the upstairs apartment. In the early ‘90s, the two-story brick was up for sale at almost a million dollars. She played on the steps of the rectory under the guardian eyes of the nuns. As the eldest of Michael and Josephine DeMarco, she was assigned to be the child guardian of her widowed grandmother Butera, accompanying her to church and to the markets. Marie went daily to church with her “Nonni” at Sacred Heart, across the street from the tower of Paul Revere fame. There she was first introduced to the arts, most memorably in her mind, the statue of the Mother of Sorrows. Marie’s mother was a seamstress for hire and an embroideress of fine cottons and linen. Marie learned the art of sewing. But years later, when her parents wintered in Cape Coral, it was Marie’s mother who took First Place in the local sewing contest, ahead of her daughter. And we still have the trophy to prove it! She spent the rest of her life, learning on her own, and attending workshops to learn a specific art or craft. Sewing, lampwork bead making, stained glass, ceramics, bead wiring, painting—even silk-painting, ceramics, woodcarving. silversmithing, jewelry- making. You name it, she tried it. Marie was born and raised a Catholic. She attended church daily from an early age with her devout grandmother. Catholicism is a sacramental religion. The Incarnation of God is reflected not only in the signs and wonders of the Sacraments, but in sacramentals, complementary images and actions, that remind us that “The Word became flesh and dwelt among us.” Marie’s artistic life and spirit served the Church. At Christ the King Church in Tampa, Marie was an active member of the Altar Society. She decorated the altar with flowers, and she created and cared for the linens. At St. Andrew in Cape Coral, having been introduced to the Charismatic movement, she became the director of the parish group there. Raising two girls, Anna and Lisa, Marie taught them the arts. Marie’s first husband, Richard Matthews, father of Anna and Lisa and step-daughter, Ellen, was a model ship builder. And she cared for him the last years of his life. When he passed, she sewed alterations for Penny’s and a local assisted living facility, to augment her income as a widow. The signs and wonders of God came to full flower at St. Patrick’s Church in Mount Dora where she has created memorable images that reflect the life of God-with-us in stained glass: the side church windows of the Beatitudes which blend with the great work of Sr. Diane Courture, SSJ of the Sisters of St. Joseph in St. Augustine FL.; the 5 diamond-shaped stained glass pieces that are posted behind the processional cross: the grapes; the wheat; the rose; the shamrock; the sun. She also created a large stained glass piece, The Holy Name of Jesus/IHS, which is the name of the Franciscan TOR province that has ministered at St. Patrick’s since the late ‘80s. It hangs in the front window of the rectory in Elysium. Marie DeMarco Matthews Welch passed away in the early morning of June 25th, 2020. When Marie and I would be out for a drive in the car, she would look up at the clouds in the sky and say: “Oh! See that dog! It looks like Primo.” She’s up there now, swashing the clouds in the sky to create images for our delight and inspiration. Marie is survived by her husband, Bernard L. Welch; two daughters: Lisa and Anna; step-daughter, Ellen; grandchildren: Luke and Matthew; Lillian and Bella; sisters: Sue, Joanna, Diane; brothers: Joe and Dominic. And the family of St. Patrick’s Church. In lieu of flowers, donations may be made in her honor to One Heart for Women and Children, a local food bank www.oneheartforwomenandchildren.org

Marie was born on August 3rd, 1930, and raised on the North End of Boston in a cold-water flat across the street from St. Stephen&#8217;s Church. Her parents paid $15 dollars a month for the upstairs apartment. In the early &#8216;90s, the two-story... View Obituary & Service Information

The family of Marie DeMarco Matthews Welch created this Life Tributes page to make it easy to share your memories.