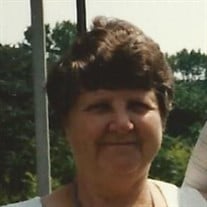 Marguerite (Peg) Ellen (Eckrote) Heller passed away on Thursday, January 9, 2020 in Lebanon, New Hampshire after spending the day with family and the compassionate staff of Lebanon Genesis. She was born in Hazelton, Pennsylvania in 1924 to Lyman Royce and Myrtle (Woodring) Eckrote as the youngest of four surviving children. She became a child of the Great Depression and lost her father at the age of twelve. Before finishing high school, she took a job in a factory to build airplane guidance systems and bomb sights. After World War II, she met the love of her life. Edward Evan Heller, at a dance. They married and after Ed finished his schooling as a printer, lived in Erie, Pennsylvania. In Erie, Peg worked at W. T. Grants, first at the candy counter, then in the baby department. She and Ed had three children before moving to the suburbs of Washington, D.C. Within a few years, she was caring for foster children at their home in Belair at Bowie and later in Greenbelt and looked after more than sixty infants, some from birth and some until the age of two. Often there were two infants in the house at a time and occasionally as many as four for brief periods. Peg quipped that she quickly got each baby to sleep through the night by sleeping on her good ear. When a child was ill, she took them to her own doctor and when they left her care, she sent each off to their family with the clothing they had been wearing and with their toys. The Governor of Maryland presented her with a certificate for her efforts giving those children a good start in life. After a workplace injury, Ed retired and they shortly moved to Florida, where they lived for several decades. In retirement, Peg finally earned her GED. She kept busy with a variety of hobbies, including a continuing variety of pets, crocheting, and raising violets. She and Ed enjoyed road trips and going on ocean cruises. Eventually Ed spent sixteen years dealing with Alzheimer's and more than ten years with prostrate cancer. Once Ed needed the additional care of a nursing home, Peg visited him every day for several years. Peg came to Lebanon, NH to live near her eldest son and his family in 2014 when she, too, developed signs of dementia. Peg is survived by her children, David, DIL Lucinda (McBain) Heller, their daughters Morgan and Sarah; Kenneth, DIL Mary (Dobbins), her daughter Aimee Garrison, DI LAnne (Aube), her daughters Jennifer and Ashley; Dianne Dufresne and her son Jonathan Krum (and his wife Beth (Paulus) Krum; eight great-grandchildren; and five great-great-grand-children; numerous nieces and nephews; and her older brother Robert Eckrote. She was pre-deceased by her husband, her parents and her siblings Dorothy (Dutch) Cheslock and Lyman THomas Eckrote. She will be laid to rest with her husband at the Florida National Cemetery in Bushnell, Florida on Wednesday, January 15th, 2020 at 1:30 PM.

Marguerite (Peg) Ellen (Eckrote) Heller passed away on Thursday, January 9, 2020 in Lebanon, New Hampshire after spending the day with family and the compassionate staff of Lebanon Genesis. She was born in Hazelton, Pennsylvania in 1924 to... View Obituary & Service Information

The family of Mrs. Marguerite Ellen Heller created this Life Tributes page to make it easy to share your memories.

Send flowers to the Heller family.