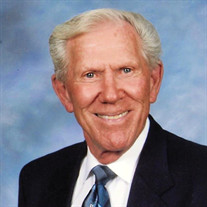 Jay W. Leek of Tavares, Florda formerly of Ponte Vedra Beach, passed away on Saturday, September 11, 2021 at the age of 93. He was born in Albany, Indiana. Jay joined the Merchant Marines at age 16 and at age 17 joined the United States Navy and received an Honorable discharge in 1947, as Yeoman Third Class. He then joined the Navy Reserves and served until 1954. He served on the USS Charles Roan, USS Moore, USS Keith and the USS John Hood. Jay had an undergraduate degree in Industrial Engineering, and graduate degrees in Management and Business Administration. He was a former President of the American Society for Quality Control and is an Academician of the International Academy for Quality. He has served on the Board of Directors of the Florida Citrus Sports Association and Board of Trustees of the Florida State University Foundation, Southern Bank of Central Florida and Electro-World, Inc. He was a member of the Editorial Advisory Board of Quality Magazine, member of the Air Force Association, American Association for the Advancement of Science and the President's Association of ANA and was a registered professional engineer. Jay was Chairman and CEO of Leek International, Inc. He is the former President of Philip Crosby Associates, Inc. and a Director Emeritus. He previously served as Vice President and Director of Northrop Corporation, in addition to senior manager positions with Martin Marietta, Bulova and Nutone, Inc. He is listed in the international "Who's Who of Intellectuals" and in 1979 was elected to the American Management Association's "Wall of Fame." Jay is remembered and will be dearly missed by his wife of 20 years, Laurayne “Larry” Leek; children, James (Bonnie) Leek of Las Vegas, Nevada, Marilynn (David) Weis of Tavares, Debi (Andy) Jakubcin of Oviedo, Florida, Scott (Gail) Leek of Denver, Colorado, Tim (Betty) DeCoursey of Raleigh, North Carolina, Stacy DeCoursey of Bonita Springs, Florida, Rod (Angela) Leek of Ocala, Florida, Mike DeLaHaunt of Jacksonville, Florida, Jill DeLaHaunt (Marc Rosenbaum) of Martha’s Vineyard, Massachusetts; sister, June Rabanus of Tavares; grandchildren, Joy, JJ, Hope, Chad, Brian Richie, Melina, Tyler, Austen, Rory, Baron, Mason, Avery, Amelia, Lily, JT, Deanna, Dylan, Summer, Skye, Michael, Ian, Chloe and Emily; great-grandchildren, Jasmine, Colm, Faith, Lily, Cash, Kylie, JJ, Zoey, Drake, Hunter, Ragan, Laci, Shelbi, Marcell and Arianna; and several great-great-grandchildren. A memorial ceremony will be held on Friday, November 12. 2021 at the funeral home. His final resting place will be at Florida National Cemetery. In lieu of flowers, donations may be made in his name to the Alzheimer's Association. www.alz.org Condolence, memories and photos may be shared on the tribute wall.

Jay W. Leek of Tavares, Florda formerly of Ponte Vedra Beach, passed away on Saturday, September 11, 2021 at the age of 93. He was born in Albany, Indiana. Jay joined the Merchant Marines at age 16 and at age 17 joined the United States Navy... View Obituary & Service Information

The family of Jay W. Leek created this Life Tributes page to make it easy to share your memories.