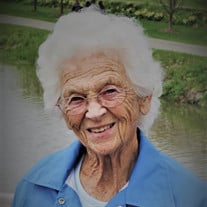 Janet F. (Sumney) Parker, age 94, of Tavares, FL went home to be with her Lord, Monday, November 9, 2020. She died peacefully in the presence of family after a full and generous life of service to others and a valiant struggle against Alzheimer’s disease. Janet was born on September 13, 1926 in Sturgis, MI. She was the youngest of six children of the late Charles Calvin and Georgia Ethel (Lung) Sumney. On November 24, 1946, she, and Eldon (also of Sturgis, MI) were married in Thomasville, GA. They were married for nearly 62 years. In 1950 Janet and her husband settled down in St. Petersburg, FL to raise a family. In addition to being a homemaker, a piano teacher, and one of the ground-breaking “woman sales representatives” of the Tupperware Home Parties of the 1950s and 1960s, Janet was the bookkeeper for the family businesses: Parkers Radiator Service and Turtle Top Campers, (a van conversion operation). Janet was always passionate about baking, knitting, and crocheting. Her home baked cookies, pies and cakes and her handmade sweaters, booties and afghans were her gifts of love to family, friends, and neighbors. In 1973, the Parkers retired to Western North Carolina where Janet served as a volunteer at the local elementary school, and together, she and Eldon found a new hobby - ceramics. Janet played piano at numerous churches, often accompanying Eldon for special music. They traveled with a gospel singing group before returning to Florida in 1985. Throughout their married lives, Janet and Eldon remained faithful to their local churches, serving wherever needed. Mom lived her wedding vows, providing us with a loving model of her commitment to: “for better, for worse, … in sickness and in health, … till death do us part”. For over three years, she went to the nursing home early every morning to be with dad for his breakfast, stayed with him until after lunch and then returned every afternoon for his supper and to kiss him goodnight. She never left his side throughout his final days and was lying next to dad when Jesus called him home. In addition to her husband and parents, Janet was preceded in death by an infant son, Arlan G. Parker, and brothers and sisters, Merritt Robert, Doris Lucile (Van Deventer), Malcom Edward, Helen Jane, and Maurice Dale (Suds). Janet is survived by two sons, Rev. Allan D. Parker (Sara) and Gary M. Parker (Debra), three grandchildren, Andrew Parker, Travis Parker, and Jennifer (Parker) Benton, and five great grandchildren, Owen, Aaron, Jared, Natalie, Audrey, and Carter. The family will receive relatives and friends from 5:30 – 7:30 p.m. on Friday, November 13, 2020 at Steverson Hamlin & Hilbish Funeral Home in Tavares, FL. and from from 10:30 – 11:30 a.m. on Monday November 16, 2020 at the London Funeral Home, 879 South Main Street, London, KY. A graveside service celebrating the life of Janet Parker will follow at 12:30 p.m. Monday, November 16, 2020 at the Mt. Zion Cemetery with Rev. Allan D. Parker officiating.

Janet F. (Sumney) Parker, age 94, of Tavares, FL went home to be with her Lord, Monday, November 9, 2020. She died peacefully in the presence of family after a full and generous life of service to others and a valiant struggle against Alzheimer&#8217;s... View Obituary & Service Information

The family of Janet F. Parker created this Life Tributes page to make it easy to share your memories.

Send flowers to the Parker family.