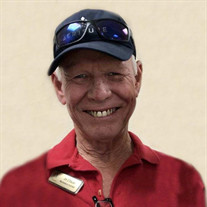 James Michael (Jim) O’Dwyer James Michael O’Dwyer, age 66, passed away at his home peacefully on March 28, 2021, after an illness. He was born on July 20, 1954 to the late Middleton William and Elizabeth (Betty) Calais O’Dwyer in Miami, Florida. In 1980 he married Donna Chappelear in Miami, Florida. They resided in Miami until relocating to Tavares in 1994, where he worked for Showcase Homes in Mount Dora for several years prior to joining Avante in Leesburg until retiring in 2019. Jim was passionate about music, sharing music with others, politics, helping others in any way he could and he loved all animals, especially dogs. His friend, Scooby the Doberman, came to visit several times prior to his death. He also loved boating and exploring the many waterways of Lake County. In addition to his parents listed above, he was predeceased by his nephew, David Joshua O’Dwyer. He is survived by his wife of Tavares, Florida, brothers Bill (Cindy) of Candler, NC and David (Jackie) of Port Charlotte, FL. He is also survived by his parents-in-law, Hugh and Elizabeth (Lib) Chappelear of Bennettsville, SC, sisters-in-law Cindy Wright of Charlotte, NC, Rebecca (Jeff) Sprayberry of Bennettsville, SC and brother-in-law, Eddie Chappelear of Candler, NC. Survivors also include nephews Sean (Mary) O’Dwyer of Palm Beach, FL, Brian O’Dwyer of Covington, GA, Collin O’Dwyer of Deland, FL and Josh Wright of Charlotte, NC. He is also survived by nieces, Brittany Sprayberry of Gastonia, NC, Chelsea Sprayberry of Eden, NC and Elizabeth Chappelear of Charlotte, NC. Also surviving are great nephews and nieces Evan, Lucy, Becca, Mattox and Brady as well as many loving cousins and friends. Services will be held at a later date due to Covid-19. In lieu of flowers, memorials may be made to Lustgarten Foundation - Pancreatic Cancer Research, 415 Crossways Park Drive, Suite D, Woodbury, NY 11797; or Cornerstone Hospice, 2445 Lane Park Rd., Tavares, FL 32778; or the charity of one’s choice.

The family of James Michael O'Dwyer created this Life Tributes page to make it easy to share your memories.

Send flowers to the O'Dwyer family.