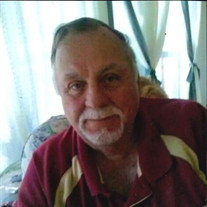 Jack Otto Tomson, 77, a beloved father, brother, grandfather, retired police officer and friend, went to be with his Heavenly Father on Thursday, August 26, 2021. Jack was born on May 29, 1944, in Strongsville, Ohio to Arthur and Meredith Tomson. Jack lived and went to school in in Strongsville until his freshman year in high school where he moved to Tavares and graduated Tavares High. After graduating Jack got his first job as a receiver at John Wannamaker's. In 1963, he served his Country proudly in the United States Air Force in Vietnam and received the rank of Airman (A2-E). After receiving an Honorable Discharge from the Air Force, Jack continued to serve his community by joining the Tavares Police Department. After retiring there, he went on to join the Eustis Police Department and retired from them as well. He then joined the Lake County Sheriff's Department, obtaining the rank of Sergeant and then finally retiring permanently from police work. Jack also coached in little league and in youth football. One of Jack's passions was spent fishing and spending time on the Flagler River and just being at home enjoying his children and great grandchildren. A selfless man who ensured our safety, loved his community and was a devoted family man. He will be sorely missed. Jack is survived by his beloved wife, Mabel, three sons: Jack O. Tomson, II, Troy N. Tomson and Arthur R. Tomson; and grandchildren: Jack O. Tomson, III, Tucker N. Tomson Brandyn Swindle, Travis Tomson, Tyler Tomson, Auston Tomson, Peightyn Tomson, and Haleigh Tomson. A gathering of family and friends for Jack is scheduled for Wednesday, September 1st, 2021, at Steverson, Hamlin & Hilbish Funeral Home, 226 E. Burleigh Blvd., Tavares, Florida 32778. A Celebration of Life Service will follow his gathering beginning at 1:00 PM at Steverson's with Pastor Bruce Potter officiating. Jack's place of rest will be at Tavares Cemetery immediately following his services with the United States Air Force performing Military Honors.

Jack Otto Tomson, 77, a beloved father, brother, grandfather, retired police officer and friend, went to be with his Heavenly Father on Thursday, August 26, 2021. Jack was born on May 29, 1944, in Strongsville, Ohio to Arthur and Meredith Tomson.... View Obituary & Service Information

The family of Jack Otto Tomson created this Life Tributes page to make it easy to share your memories.

Send flowers to the Tomson family.