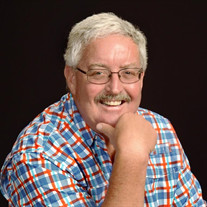 George Randall “Randy” Jones, age 59, born June 23, 1960, passed away peacefully and unexpectedly at his home in Tavares, Florida on November 3, 2019 with his beloved wife Lynn of 27 years beside him. Randy lived life to its fullest each day, even golfed, visited his family and watched Gator football on his last day. When he wasn’t visiting customers and running his business, he enjoyed playing golf with many of his friends on weekends, taking his wife on an adventure and even the simpler things in life as enjoying a picnic by the water and feeding the ducks. He was very active in his grandchildren’s lives. Randy always had an incredibly optimistic outlook that affected everyone. He loved the mornings, especially feeding his birds that would visit the many feeders in their yard. Born in Orlando, Florida to Clifton Edwin Jones and Georgine Ellyn Kerr Jones, Randy attended Saint Charles Catholic School, Robert E. Lee Middle School, Edgewater High School and Valencia Community College. On the golf team throughout his school years, he continued his golf profession and turned PGA club pro. He was the golf pro at Waynesville Country Club, Maggie Valley Country Club and Laurel Ridge Country Club, all in North Carolina. Randy would come down to visit his family in the winter when the golf course closed for the season. Later in life, he worked in the beverage business for Schenck Company, now Florida Distributors. He enjoyed being in sales so much that Randy opened up his own successful embroidery business called “Unique Towels and Accessories.” He started out in his new business by calling on mostly golf courses and later expanded to all types of businesses, including many local schools and churches. Randy was a thoughtful, loving husband, a kind father and a wonderful granddad to his beautiful grandchildren with whom he loved to spend a lot of time. As a devoted Catholic, Randy attended Mass every week at Saint Charles Borromeo Catholic Church. He was also a member of the Knights of Columbus. Randy will be truly missed by his wife Jennie Lynn Jones, son Tommie Peebles, daughter-in-law Stephanie Peebles and the grandchildren Makenna (Michael) Crowe, Gracie Peebles and Dylan Wrenn-Peebles and his siblings, Sandra Ellyn Bauerschmidt, Dolores Marie (Tim) Tanner, Larry Clifton (Jeannie) Jones and Mary Katherine (Rex) Hersey, many nieces and nephews. He was preceded in death by his mother Georgine Ellyn Jones, his father Clifton Edwin Jones, his brothers, Robert Michael “Bob” Jones and Paul Edwin Jones. Service will be at 11 a.m. Saturday, November 16, 2019, Saint Charles Catholic Church, 4001 Edgewater Dr., Orlando, FL 32804 with reception to follow at Bishop Grady Hall, steps from the church. Please bring notecard with stories of Randy to share at microphone. Comments and pictures can be shared on the tribute wall. SErvices have been entrusted to Steverson Hamlin and HIlbish Funerals and Cremations.

The family of George Randall Jones created this Life Tributes page to make it easy to share your memories.

Send flowers to the Jones family.