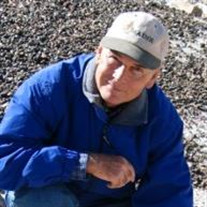 George Franklin Guler, 86, passed away Friday, January 31st, 2020 at his residence in Tavares, FL due to complications from Parkinson’s disease. George was a loving husband, father, grandfather, and friend to everyone. George is survived by his wife of 64 years, two sons, a daughter, and two granddaughters. Dale and Pam Guler of Mount Dora and their daughters Courtney and Jessy; Michael and Beth Guler of Punta Gorda; and Cheryl and Alberto Montes of Eustis. George was born February 20, 1933 in Philadelphia, PA, the son of George Daniel Guler and Janet (McGregor) Guler. He completed high school in Decatur, GA and earned a degree in Electrical Engineering from Georgia Tech. His first job brought him to Minneapolis, MN where he met Lois Thompson, fell in love, and married in 1955. The newlyweds headed south to Merritt Island, FL where George supported NASA’s early rocket development. His engineering career sent him from Minnesota to Florida to Texas to Georgia and back to Florida. Moving on to the business world, he became comptroller of a start-up cement truck manufacturer in Minnesota, which grew to one of the largest in the country. Eager to get back to the south, he took his last job as a program manager at the Redstone Arsenal in Huntsville, AL. After retirement, George and Lois have enjoyed living close to family in both Georgia and Florida. During his teens, George developed a strong interest in radio, which led to a lifelong hobby of building and refurbishing radios. He held an amateur radio license for over 70 years with calls W4LFD, W0OIR, and most recently W4GFG. George was a private pilot in his younger years and switched to sailing later. George and Lois spent many relaxing vacations sailing in the Caribbean. George was an avid tennis player his entire life. A private celebration of his life was held with family members to grieve, laugh, and remember the wonderful family times and adventures of his life. In lieu of flowers, a memorial tribute gift donation may be made to the Parkinson’s Foundation at www.parkinson.org.

George Franklin Guler, 86, passed away Friday, January 31st, 2020 at his residence in Tavares, FL due to complications from Parkinson&#8217;s disease. George was a loving husband, father, grandfather, and friend to everyone. George is survived... View Obituary & Service Information

The family of George Franklin Guler created this Life Tributes page to make it easy to share your memories.

Send flowers to the Guler family.