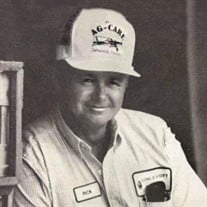 Eric Russell Carter “Rick”, 75, of Mt. Dora, Florida passed away surrounded by his loved ones on December 7, 2020. Rick was born on March 4,1945 in Andalusia, Alabama to CWO Eugene R. And Gladys Marie Carter. Although because of health problems he was never able to serve in the Armed Forces in later life, he did grow up in a military family. The family lived in many different states, and overseas in Germany, before their final military station destination of Seymour Johnson AFB in Goldsboro, NC. Rick attended many different schools as they moved around, including for a time, Mount Dora High School. He graduated in1963 from Goldsboro High School in Goldsboro, NC and after graduation married his high school sweetheart Eve McCartney. After graduation Rick lived in the Daytona Beach area and over the next few years worked in several fields including construction, manufacturing, and sales and service. In 1973, while living in Haw Creek outside Bunnell, Florida, he discovered what was to be his lifelong passion, farming. Farming was a common thread in his family in addition to military service. His favorite uncle, Cecil Fleming, had retired from the Air Force and settled in Alabama where he farmed and raised hogs. Rick especially enjoyed the time he spent with him on his farm during family reunions. Rick’s eventual occupation fulfilled the slogan printed beneath his picture in his 1963 senior yearbook—HE MAKES HAY WHILE THE SUN SHINES— when he actually began to grow, bale, and sell hay. His pursuit of farming finally brought him to Lake County. He first started out inspecting sweet corn for Long and Scott Farms. In 1977, he became their production manager and grew the famous Zellwood Sweet Corn, among other crops, until he retired in 2002. Still needing to keep busy, Rick began using his own property and formed Lake Jem Nursery, growing landscaping plants for wholesale distribution. The business grew steadily until the economy sharply declined in 2009 leaving nursery businesses with plants they could not sell. He retired again, though not willingly. Unable to completely get the dirt out from under his fingernails, it was not too long before he took up growing sod for Lake Jem Farms. He grew several types of sod in locations in several counties for them before retiring for the third time in 2019. In addition to farming, his love of the outdoors included an addiction to hunting. He was a founding member of the Pecan Ridge Hunting Club and Lodge in Bainbridge, Georgia. It is almost impossible to describe how much he lived and breathed hunting and how much the friendship and bond that formed between him and the other hunters in the club meant to him. He is survived by his wife Eve of 57 years; siblings and their spouses, Jeanne and Paul House, Cindy and Hank Scott, Janet and Jim Hart, Chuck and Julie Carter, Missy and Kelly Dollins; children and their spouses, Erica and Matt Wilhelm, Erin and Jason Heft, Lauren Carter; grandchildren and their spouses, Jacqueline and Maria Guerrero, Nicholas Wilhelm, Mattie, Vivian and Eva Heft; great grandchildren, Declan Guerrero; and numerous nieces, nephews and cousins. He was preceded in death by his parents Eugene and Marie Carter and his sister, Elaine Phillians. In lieu of flowers, donations may be made to The Salvation Army.

The family of Eric Russell Carter created this Life Tributes page to make it easy to share your memories.

Send flowers to the Carter family.