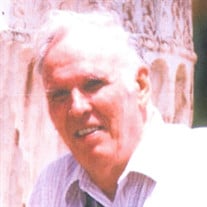 Earl V. “Vic” Walker of Tavares, Florida, passed away in his home surrounded by loving family on March 14, 2021. Memorial services will be held at a later date at Royal Harbor in Tavares, Florida and in East Moline, Illinois. Dates to be determined. Donations may be made in Vic’s memory to St. Jude Children’s Research Hospital, PO Box 50, Memphis TN 38101-9929. Vic was born in Moorhead Park, California, in February 1935, the son of John Victor and Ruby (Mack) Walker. He grew up and was schooled in Southern California, joined the United States Marines at age 16, and was stationed in Okinawa during the Korean War. After serving in the military, he moved to Rock Island, Illinois where he enrolled at Augustana College. While there, Vic met the love of his life, JoAnne Earle, and they were married in Rock Island in May 1959. Shortly after their marriage, the couple moved to Southern California where Vic resumed his studies and graduated from San Fernando Valley State College. They remained in California for several years before returning to Rock Island where Vic began his teaching career. He taught in elementary and junior high schools and at Rock Island High School where he moved into the Vocational Improvement Program (VIP) and started his own Adult Education Program, STAR. Both were successful programs educating learningchallenged and underserved students, who were returning to school, and providing them with opportunities for high school graduation, college admission, and job placement. He truly loved teaching and watching his students learn and grow as was evidenced by his 47 years in the education field. Vic spent many of his adult years in school himself earning an Education Specialist degree (EdS) and a Master of Science in Education degree. During those years, he received a number of awards for his teaching and administrative skills along with the honor of being a lifetime board member of the Quad Cities Botanical Center. After retiring, Vic and JoAnne moved to their dream home in Tavares where they loved their 55+ community, neighbors, and the many activities, including often dancing the night away. Vic continued his teaching at Sumter Community College in Leesburg, Florida. They also enjoyed traveling around Florida, to a resort in Tennessee, back to the Midwest, and to the Western U.S. Their favorite vacation was a three-week Mediterranean cruise with three days in Rome and a private tour of the Vatican. More than anything else, Vic loved every moment with his wife, children, grandchildren and great grandchildren. He had an unforgettable sense of humor that brought laughter to everyone who knew him. Those left to cherish Vic’s memory are his wife, JoAnne, four sons, Scott Walker and wife Jennifer of Clearwater, FL; Eric Walker of Clearwater; John Walker and wife Ana Paula of Ann Arbor, MI; and Joel Walker of Tavares; a son who was adopted as an adult, Carlos Walker of Iowa City, IA; Grandchildren Jonathan, Kelli, Jacqueline, Jared, Jordan, Bradley Joel, Colin, Kirk, Victor, John Paulo, Joel Daniel, and Isabella; Great grandchildren Tai, Kiera, Freya, and Axel; brother, Thomas Walker and wife Barbara of California; sister-in-law Debbie Earle, Foristell, MO, sister-in-law Judy Waters, Chandler, AZ and many wonderful nieces and nephews. Vic was preceded in death by his parents, a sister, Pearl Walker, brother-in-law Steven Earle, brother-in-law Bill Waters, and his wife’s parents, Anita and Harold Earle, whom he called “Mom” and “Dad.” This beloved gentleman will be dearly missed by family, friends, and students.

Earl V. &#8220;Vic&#8221; Walker of Tavares, Florida, passed away in his home surrounded by loving family on March 14, 2021. Memorial services will be held at a later date at Royal Harbor in Tavares, Florida and in East Moline, Illinois. Dates... View Obituary & Service Information

The family of Earl Victor Walker created this Life Tributes page to make it easy to share your memories.

Earl V. “Vic” Walker of Tavares, Florida, passed away in his...

Send flowers to the Walker family.