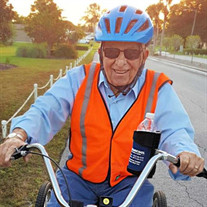 Donald Leo Rushlo, Tavares, FL (formerly of Caro, MI) earned his angel wings and found his way to heaven on October 1, 2021. Don was born July 27, 1931, on the family farm in Cass City, Michigan to Ellis Rushlo and Mary (Rushlo) Schaper. He attended the Cedar Run School through the 8th grade. He left school to work on the family farm until it was sold. He drafted into the Army where he spent 2 years stationed in Kaiserslautern, West Germany. His family always teased him about the fact that he was assigned to the Signal Corps but ended up operating heavy equipment to construct an officer’s golf course. On October 28, 1950, he married Marion Findlay at the Reese United Methodist Church in Reese, MI. They resided in Caro, MI until 1982 and raised their three children, Gary, Gail, and Dale. During his years in Caro, Don was in partnership with his brother, Ferris. They started Rushlo’s Garage which later became Rushlo’s Wrecking working together until 1970. Don owned and operated Don’s Travel Center, in Caro, until he lost that business to a fire in 1971. He then purchased a boat dock manufacturing company out of Battle Creek, MI and moved it to Caro. He put his heart and soul into this business until 1982 when he decided it was time to retire. Don and Marion spent many years, after leaving Caro, traveling throughout the United States with a particular interest in making certain that their travels took them some place warm in the winter. Primarily to Florida and Arizona and eventually settling down in Tavares, FL. When he wasn’t working on a project, making wooden crafts, or selling his wares at a craft fair, he was always up for a good game of euchre or one of many board games he mastered over the years. In his later years, after Marion passed, he took to riding a 3-wheel bicycle for exercise and enjoyment. He was so proud to come back from a ride and boast about how many miles he had gone that day. To everyone’s amazement he would typically go from 8 to 12 miles a day! Don leaves behind his three children Gary (Sheri) of Leesburg, FL, Gail of Salem, OR and Dale (Deb) of Ada, Michigan. He was blessed with five grandchildren Jennifer (Ed) Sternisha, Chris (Jen) Rushlo, Michelle Rushlo, Josh Rushlo and Cory (Brittany) Rushlo along with ten great-grandchildren. His brothers Ferris of Sebring, FL and Dave of Scottsdale, AZ, sisters-in-law Kay (DuRussel) Findlay of Reese, MI, Pauline Findlay of Cass City, MI along with many nieces and nephews. He was preceded in death by his beloved wife Marion, his parents, Ellis Rushlo and Mary Schaper, his sister Mona Lee “Wink” Osborn, brothers-in-law John and Paul Findlay and Ruben Mohr, sisters-in-law Phyllis Findlay, Jean Mohr, Joann Rushlo. Don has chosen cremation with burial in the Denmark Township Cemetery in Reese, Michigan details to follow later this year.

The family of Donald Leo Rushlo created this Life Tributes page to make it easy to share your memories.

Send flowers to the Rushlo family.