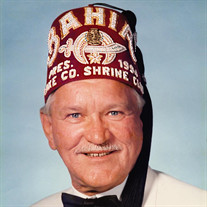 Donald Russell Gullickson (Gully), 84, passed away peacefully on Thursday, April 15, 2021. Don was born in Hammond, Indiana on September 24, 1936. The son of the late Lester and Ruth Gullickson. He graduated from Hammond High School and immediately went to work for Inland Steel in East Chicago, Indiana and retired with 30 years of service. Don is survived by his wife Sue of 38 years, Sister Elaine Koenig (Bill) of Indiana, Sons Timothy Gullickson (Vicki) of Minnesota, Daryl Carl Longfellow of Virginia, David Matthew Longfellow of New Jersey, Daniel John Longfellow for Florida and Daughter Lisa Doherty of Indiana, five Granddaughters, one Great Grandson and multiple Nieces and Nephews. He was preceded in death by his Brother Roy. After moving to Eustis in 1986, he obtained a position with the Lake County Clerk's Office, Supervising the County's Records Division, retiring with 15 years of service. He dedicated his remaining years to the Shriners. He was a member of the Peninsular Masonic Lodge #85 in Tavares, Florida; Bahia Shrine in Apopka, Florida; Past Director of the Royal Order of Jesters; Past President of the Lake County Shrine Club and Shriner of the Year in 1998. The Shrine Club needed a bar for the lounge, so he built one and became Manager and Bartender for 20 plus years. He enjoyed bingo and driving the "kids" to the Shrine Hospital in Tampa. He was a member of the Lake County Shrine Club Bahia Marines Unit which was very dear to him. "Gully" was an avid fisherman and loved to hunt. He will be missed by all. A celebration of life service will take place on Sunday, April 25th at 1:00 PM, at the Lake County Shrine Club, 424 N. Duncan Drive, Tavares, Florida 32778

Donald Russell Gullickson (Gully), 84, passed away peacefully on Thursday, April 15, 2021. Don was born in Hammond, Indiana on September 24, 1936. The son of the late Lester and Ruth Gullickson. He graduated from Hammond High School and... View Obituary & Service Information

The family of Donald Russell Gullickson created this Life Tributes page to make it easy to share your memories.

Send flowers to the Gullickson family.