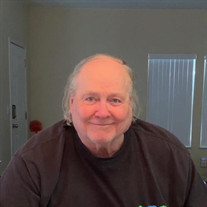 Donald L. Cisney September 22, 1944 - April 30, 2022 Don passed unexpectedly on Saturday 4/30/2022 at home in Groveland, FL. Don was born in Fruita, CO, where his parents, Warren and Evelyn Cisney, had met and married. He was raised in Santa Maria, CA and graduated from Santa Maria HS in1962. He married Suzanne Cisney in 1965 and raised his family in Santa Maria. Don enlisted in the California National Guard (1966-1972). He went to work as a Software/Hardware Engineer for New Mexico State University where he contributed to solving various programming challenges for the space and defense industries. He finished his working career as a small business partner at Olocco Ag Services, retiring in 2002. He enjoyed playing golf, spending time with his family at Disney World (especially with his grandchildren), and after he could no longer play golf he became an avid Formula One racing fan. He also enthusiastically followed Space X innovations, launches and missions. He is survived by his wife Suzanne (Susie) Cisney of Groveland, FL; daughter Tracey Cisney of Lady Lake, FL and granddaughters Ashley Schofield of Alpharetta, GA, Brittany Schofield and Mackenzie Schofield both of Lady Lake, FL; son Eric Cisney (Kerri) and grandson Steven of Huntsville, AL; and brother Ron Cisney (Brenda), nephews Trevor Cisney, AJ Cisney (Roseanne) and their daughters Claire and Brooklyn Cisney, all of Santa Maria, CA. He was preceded in death by his father, Warren George Cisney, (1986) and mother, Mabel Evelyn Cisney (2015). Per his request there will be no services. In lieu of flowers, the family requests donations be made to Moffitt Cancer Center (give.moffitt.org).

Donald L. Cisney September 22, 1944 - April 30, 2022 Don passed unexpectedly on Saturday 4/30/2022 at home in Groveland, FL. Don was born in Fruita, CO, where his parents, Warren and Evelyn Cisney, had met and married. He was raised in Santa... View Obituary & Service Information

The family of Donald Lee Cisney created this Life Tributes page to make it easy to share your memories.

Send flowers to the Cisney family.