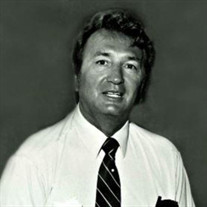 Dennis Dewayne Wilson, age 86, of Tavares passed away on Tuesday, September 29, 2020. He was born July 23, 1934 in Senath, MO and moved to Florida in 1967. He was the son of the late Harvey Jones Wilson and Alice Walls of Senath, MO. He received a Bachelor’s degree from Arkansas State University in Jonesboro, Arkansas and a Master’s of Education from Florida Technological University (now known as the University of Central Florida). He was a veteran of the U.S. Army and served during the Korean War. During his time in the Army, he was the 1954 Fort Hood boxing featherweight champ for the 4005th Enlisted Detachment, participating in boxing matches across the country, even at Madison Square Garden. After hitch hiking to Detroit, Michigan as a teenager and becoming a taxi cab driver and a short career as a professional boxer, he relocated to Tavares and enjoyed a diverse career as a retired Tavares High School history teacher, driver’s education instructor, and baseball/basketball coach where he mentored and helped numerous student athletes gain a college athletic scholarships to their dream schools. He served as a public-school teacher for over 20 years. He was selected in 2006 to be a Tavares City Councilmember, a member of the local Elks Club, and the American Legion. He served other community roles such as president of the Tavares Library Board, the president of the Florida Driver and Traffic Safety Education Association, and the Lions Club. He enjoyed golfing, fishing, and duck hunting. He was a frequent golfer and member of local country clubs and involved in competition for local tournaments. He liked watching the St. Louis Cardinals baseball games, Florida Gators football games, watching reruns of Matlock, and reading crime/mystery and historical fiction novels. He will be remembered for always being willing to lend a helping hand, his love of family, and friendliness to both friends and strangers. He is preceded in death by his son, David Keith Wilson and brother, Marlin Dale Wilson. He is survived by his wife, Catherine Sue Wilson of Tavares, FL; sister Sue Thomas of Lady Lake, FL; son Dan Wilson of Tampa, FL; daughter Darla Wilson of Tavares, FL; daughter Dana Bartholomew of Tappahannock, VA; grandson Dustin Wilson of Tampa, FL; granddaughter Danielle Zuk of Herndon, VA; and grandson Dean Wilson of Tavares, FL. Family and friends are invited to gather for viewing on Saturday, October 3 from 12:00 – 12:30 PM with a funeral ceremony starting at 12:30 PM in the funeral home chapel. A graveside ceremony with military honors will take place immediately following the chapel ceremony at Lakeside Memory Gardens in Eustis. All are welcome to attend. The Funeral Service in the chapel will be live streamed and may be watched by clicking the link below (Saturday, Oct. 3 at 12:30 PM). View Funeral Webcast Condolences, memories and photos may be shared on the tribute wall.

Dennis Dewayne Wilson, age 86, of Tavares passed away on Tuesday, September 29, 2020. He was born July 23, 1934 in Senath, MO and moved to Florida in 1967. He was the son of the late Harvey Jones Wilson and Alice Walls of Senath, MO. He received... View Obituary & Service Information

The family of Dennis Dewayne Wilson created this Life Tributes page to make it easy to share your memories.

Dennis Dewayne Wilson, age 86, of Tavares passed away on Tuesday,...

Send flowers to the Wilson family.