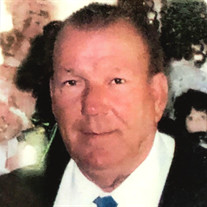 David R. Reese, 78, of Tavares, FL, passed away November 4th, 2019, David was born in Auburn, New York on August 26th, 1941, to Millard Reese & Katherine Morgan Reese. He married his wife Shirley J. Reese on May 22 in 1965. David was a fireman for the Volusia County Fire Department. After retiring he moved to Tavares and opened his own lawn care service, working until he retired in 2015. He was also a 50 year Mason. He is preceded in death by his beloved sons, Patrick Reese and David Reese Jr. and daughter Angela J. Ward. David is survived by his wife Shirley Reese, his sons Jeff Morris, Darrin Reese, Robbie Reese, and daughter Teri L. Russell. He is also survived by 12 grandkids & 9 great grandkids. David & Shirley had the opportunity to travel overseas to England, France, Belgium, Iceland, Wales, Folkston Eurotunnel to Calle, France, and across the United States to California. The viewing will be held at Steverson, Hamlin & Hilbish Funeral Home on November 8th, from 2:00-5:00PM. A Funeral Service will be held on Saturday, November 9th, at 2:00PM at the First United Methodist Church of Tavares. Memories and condolences may be shared with the family on the tribute wall. Services have been entrusted to Steverson Hamlin and Hilbish Funerals and Cremations, Located at 226 East Burleigh Blvd. Tavares, FL 32778

The family of David Richard Reese created this Life Tributes page to make it easy to share your memories.

Send flowers to the Reese family.