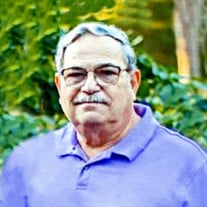 David W. Davenport, 71, of Eustis, formally from Northern New York, died Saturday September 19 from complications due to Covid 19. He was born in Syracuse New York on May 12, 1949, the son of Elmer and Grace Davenport. He married Norma Yerdon on February 6, 1987. Including his wife, he a leaves behind five children David (Wendy) -Fulton, NY; Lee - Fulton, NY; Nathan – Adams Center, NY; Donna (Ron) Casper – Washington, IL and Lisa (Steve) Cates – Leesburg, FL. Also surviving are his mother, a sister, Dawn Devendorf, 13 grandchildren, 12 great-grandchildren, and several nieces and nephews. He was looking forward to welcoming his 13th great-grandchild in October. He graduated from Cato-Merdian High School, Cato, NY in 1967. In February 1968, he joined the Navy. He served in Vietnam on USS Vancouver (LPD-2). After discharge in January 1970, he served in the reserves until Dec 1972. He worked as a Utility Engineer for New York State, in multiple facilities, retiring in 2002 after nearly 40 years. He was a member of Eagles Aerie 4273, Okahumpka, where he called Bingo and worked the fish fries. He was also a member of Lions Club in Taveres, where he was recently elected to the office of President. Unfortunately, he was unable to hold that office as he became ill prior to initiation. In addition, he was a Lifetime member of the American Legion in Sackets Harbor New York. You could always find him reading, walking nature trails or teeing off with his buddies on Sunday mornings. He loved to tinker with crafts, making cute trinkets for many. He never turned down the opportunity to wander through a museum and had a love of history like no other. His family enjoyed watching Jeopardy with him as he was always quick with answers. He was loved by many and will be greatly missed. In lieu of flowers, donations can be made to the Wounded Warrior Project at www.woundedwarriorproject.org

David W. Davenport, 71, of Eustis, formally from Northern New York, died Saturday September 19 from complications due to Covid 19. He was born in Syracuse New York on May 12, 1949, the son of Elmer and Grace Davenport. He married Norma Yerdon... View Obituary & Service Information

The family of David W. Davenport created this Life Tributes page to make it easy to share your memories.

Send flowers to the Davenport family.