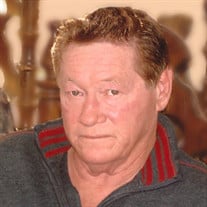 Danny Joe Montiville passed from this life on April 1st, 2022 at 72 years of age. Danny Joe was born October 26, 1949 to Lee and Rosella Montiville in Leesville, La. He graduated from Leesville High School in 1967. Danny married Cora Ilene Swindell on May 27, 1969. They were married for 52 years. Before settling in Leesburg, FL, Danny and Ilene lived in Bloomington, IN and were active members of the Highland Village United Pentecostal Church. Danny was an electrician by trade, working offshore in the oil field for many years before retiring in 1995. He was an avid fisherman and enjoyed being an active part of his grandchildren's lives. Danny is survived by his loving wife Ilene, sons Daniel and Brett (Danielle), daughters Melissa (Mark) and Christina (Mark), 7 grandchildren Justin (23), Remington (12), Kylie (11), Jackson (8), Ashton (4), Cannon (17) and Isaiah (17), and his very best friend/brother/nephew Gary Kay. Danny is preceded in death by his father (Lee Oliver Montiville), mother (Rosella Montiville), his 5 sisters (Dorothy, Betty, Audrey, Georgia Faye, and Mary) and several nieces and nephews. The family will hold a private memorial service on April 5 in Tavares, FL. A graveside memorial service will be held at a later date in Leesville, La as Danny's ashes are laid to rest.

The family of Danny Joe Montiville created this Life Tributes page to make it easy to share your memories.

Danny Joe Montiville passed from this life on April 1st, 2022...

Send flowers to the Montiville family.