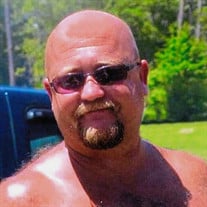 Daniel Scott Colburn (Aka Scotty or Jed), 51 of Eustis, FL passed away peacefully, surrounded by loved ones on Tuesday, February 15, 2022. Scotty was born on April 15, 1970 and is survived by his wife of 13 years - she is the Bonnie to his Clyde, Katrina Bradley, daughter and daddy's little girl, Liz Willis, stepdaughter Abby Bradley whom he loved as his own. Sons Fernando Willis and Travis Whigham (they weren't his blood, but they were his boys). Brothers Jamie Colburn and Tony Colburn (Christy), (Larry, Curly and Moe or trouble, bigger trouble and even bigger trouble), niece Vanessa Colburn-Schmidt (Rob and little Tommy), nephew Patrick Widener. Several grandchildren that he absolutely loved and adored; Kassie, Isabell, Mackenzie, Matthew & Isiah. Scotty is also survived by his brother and very best friend Steve Parrish (Wendy), nephews Robert "Scott" Parrish whom is Uncle Jed's namesake and Zachary Stephen Parrish who Scotty made sure his "fight" was also Scotty's fight. Niece Meagan Parrish, his other best friend Law, "Lawman", Uncle Ronald "Butch" Barkley, Aunt Debra Stroh, cousins Michelle "Missy" Stroh (Michael, Tyler, Joshua, Madison), Daniel "Tommy" Barkley (Sierra), Angela "Peanut" Barkley (Jacob, Sydnee, Conner), and many other relatives and friends. Scotty was preceded in death by his father, Tommy Collins, mother Sylvia Colburn, nephew Anthony "Budman" or "Bud" Colburn. Scotty was known to take in strays of the furry kind and the human kind and they all became family and children to him. He loved them all as his own. Some of them include Samantha, Cole, Bryant, Matthew, Steven, Ryder, Ronnie and just so many others. Scotty was loved and is greatly missed by his dog Bubba and other fur babies. Bubba was his baby and buddy though. Those that knew Scotty - and that was a very large number - knew what a giver he was of many things. He would go without to make sure someone else didn't. Scotty was loyal, kind, loving, giving, funny, outgoing and a little crazy - as he would say. He could make you laugh in any situation. Scotty made sure he "lived." He lived life to the fullest everyday he physically could. He had many loves and hobbies. If you knew him you knew he bled garnet and gold or red, white and blue as he was a huge American patriot and even bigger Florida State fan. He also loved to play golf - a love and talent he gained from his daddy Tommy. Scotty also loved to play pool and would often be in tournaments. If not on the golf course or at the pool hall you could find him watching football, playing and relaxing at the beach or at the grill and spending time with family and friends. Scotty was literally known by thousands but his love for others reached far more than that. He will be forever missed by everyone that was ever lucky enough to have known him and to know him, was to love him. A Celebration of Life will be held on Wednesday, March 2, 2022 at 3:30pm in the clubhouse at The Mt. Dora Golf Club, 1100 N. Highland St., Mt. Dora, FL 32757. Potluck dinner to follow, please feel free to bring a dish if you like. Scotty would love to look down and see a room full of garnet and gold - especially those that bled orange and blue. So, feel free to come rocking the colors or his other favorite of red, white and blue. LET'S NOT CRY BECAUSE HE IS GONE, BUT LET'S ALL SMILE BECAUSE HE LIVED. He truly, truly lived.

Daniel Scott Colburn (Aka Scotty or Jed), 51 of Eustis, FL passed away peacefully, surrounded by loved ones on Tuesday, February 15, 2022. Scotty was born on April 15, 1970 and is survived by his wife of 13 years - she is the Bonnie to his Clyde,... View Obituary & Service Information

The family of Daniel Scott Colburn created this Life Tributes page to make it easy to share your memories.

Send flowers to the Colburn family.