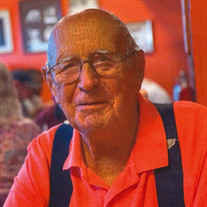 Charles (Chuck) Albert Homuth, age 88 of Clermont, FL, passed away on February 26, 2022. Chuck was born on June 5, 1933 in Seneca Township, WI to Raymond Homuth and Helen (Honzel) Homuth. Chuck grew up on a farm near Prairie du Chien, WI and this was the foundation for his enduring dedication to hard work. As a young man, he not only worked on the family farm, but also delivered milk for Selch’s Dairy. Chuck joined the Air Force in 1953 and was stationed at Castle Air Force Base in Atwater, CA. He loved to share stories of his time in the Air Force, working on B52s, and was honored to serve his country during the Korean War. He visited the base in Atwater many times over his life and was very proud to take his children there to tell them about his experiences. It was while he was in California that he met the love of his life and wife of 67 years, Eva Jo. After his service with the Air Force, Chuck and Eva returned to Wisconsin to help run the family dairy farm. After the sale of their farm, Chuck was a salesman for Wick Agribuildings, where one of his most notable successes was assisting in the design and construction of a solar grain dryer and auto repair facility, some of the firsts in the country. He also was a licensed real estate agent and drove school bus for over fifteen years. In the early 1980s the family moved to Florida and owned and operated a small bar and restaurant. In his later years, Chuck transitioned into yet another career path, going back to school and working for the Lake County Sherriff’s Office where he proudly retired after 15 years of service. Even in retirement, Chuck could not slow down and worked for several years at the Lake Square Mall as a Security Officer. Chuck loved pranks and had endless jokes to tell, always laughing at them like it was the first time he told them. He loved his family, friends, cars, tractors, and animals of all kinds including his many dogs, cows, and even pigs. He was a humble man that never met a stranger, welcomed all into his home, and treated everyone like family. He will be missed and lovingly remembered by his wife, Eva, his three children, son Jerry Homuth, daughters Carolyn Homuth and Nikki (Scott) Gokey, 5 grandchildren, Gabrielle Busseni, Holly (Branden) Gokey, Hunter, Nevaeh, and Emily Gokey, 2 great grandchildren, Brock and Holden Mraz, sister Kay Cherrier of Omaha, NE and many nieces, nephews and life-long friends. Chuck was preceded in death by his parents, sisters Arlene Homuth and Jeanette Homb, and in-laws, Ronald Cherrier and Vern Homb. A celebration of Chuck’s life is planned for Friday March 4, 2022 at Steverson, Hamlin & Hilbish Funeral Home, 226 E. Burleigh Boulevard, Tavares, FL. Visitation will start at 1:00 followed by a memorial service at 2:00. A reception will follow immediately after at the Astatula Community Center, 13251 Park Avenue, Astatula, FL. In lieu of flowers, donations can be made to VITAS Hospice Community Connection www.vitascommunityconnection.org in Chuck’s memory.

The family of Charles Albert Homuth created this Life Tributes page to make it easy to share your memories.

Send flowers to the Homuth family.