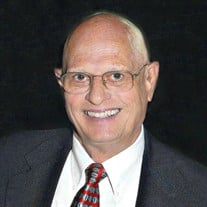 - BECAUSE OF THE CORONAVIRUS PANDEMIC MR. CHARLES HENRY BAIRD'S MEMORIAL SERVICES HAVE BEEN POSTPONED UNTIL FURTHER NOTICE- Charles Henry Baird passed away on February 5, 2020, just days before what would have been his 82nd birthday. Chuck was born in Salina, Kansas on February 11, 1938 to Charles and Gertrude Baird. He graduated from St. Agnes High School in Springfield, MO in 1956. Where his classmates remember him as being the entertainer of the classroom. He graduated from St. Joseph's College in Rensselaer, IN with a BA in Mathematics. After college, Chuck went on to serve in the U.S. Army Reserves for 6 years. Later gaining a position at Naval Avionics in Indianapolis, IN as a Mathematical Statistician. While working at Naval Avionics he met and began dating the woman whom he'd later call his wife. In October of 1970, he married his beloved wife, Deann. They were married for 49 years and together raised a son, Gregory Baird. Chuck, with his family, eventually moved to Florida in 1980; where he worked as an analyst for NCR, a manufacturing engineer for McDonnell Douglas, then as an insurance agent for Liberty Mutual, all before retiring in 2008. Outside his professional life...Chuck loved to read, you could always find him sitting down with a book in his hand. Win or lose, Chuck was a loyal fan of the Orlando Magic basketball team. He also was a car enthusiast, even owning two antique cars in his retired days. He was a grandfather and later became a great-grandfather. In his lifetime, Chuck traveled a lot with his family and his wife, Deann. Together they had visited many iconic places, some of which included: Yosemite, Yellowstone, Grand Tetons, Costa Rica, Alaska, Canada, Bahamas, US Virgin Islands, and vacationing every year at the family's favorite beach side campground. Vacationing with Chuck was never short of an adventure. Trips taken with him have left his loved ones with many memories to laugh and smile about. Chuck enjoyed bird watching; even possessing a hidden talent of whistling, so well so, that you would think you were listening to a songbird trill. Surprisingly, he learned to play the violin in his 70's. And anyone who knew him, knew that food was probably his love-language, as he kept everyone up to date on when it was time to eat, and was never one to turn down a sweet treat. Over his almost 82 years of his life, Chuck left those who knew and loved him, with some funny memories and some great times. His family will miss him dearly and will hold on to those memories forever. Chuck is preceded in death by his parents and eldest brother, Danny Baird. Chuck is survived by his wife, Deann Baird, son Gregory Baird, Granddaughter Brittany (Matthew) Newport, and Great-Granddaughter Norah Newport. His siblings Tony (Wendy) Baird, Peggy (Pete) Walker, and Steve Baird. He is also survived by several nieces and nephews. A memorial service to celebrate Chuck's life is scheduled for Tuesday, March 24th at 3:00 PM at Steverson, Hamlin and Hilbish Funeral Home, 226 E. Burliegh Blvd., Tavares, Florida, 32778 with Father Nelson Javier from St. Patrick's Catholic Church officiating. In lieu of flowers, donations can be made in Chuck's memory to the United Cerebral Palsy, 1825K. Street, NW Suite, 600, Washington, DC, 20006, Phone: 800-872-5827.

- BECAUSE OF THE CORONAVIRUS PANDEMIC MR. CHARLES HENRY BAIRD'S MEMORIAL SERVICES HAVE BEEN POSTPONED UNTIL FURTHER NOTICE- Charles Henry Baird passed away on February 5, 2020, just days before what would have been his 82nd birthday.... View Obituary & Service Information

The family of Mr. Charles Henry Baird created this Life Tributes page to make it easy to share your memories.

- BECAUSE OF THE CORONAVIRUS PANDEMIC MR. CHARLES HENRY BAIRD&#39;S...