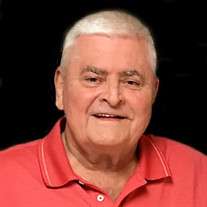 Arthur John Olsen, Jr. June 15, 1945 - February 24, 2021 Arthur John Olsen, Jr. passed away on Wednesday, February 24, 2021 in Tavares, Florida surrounded by family. He was a beloved husband, father, grandfather, brother, uncle, cousin and friend and was loved by everyone that knew him. Art was born on June 15, 1945 in Chicago, Illinois to the late Arthur and Maudwaye Olsen. He met the love of his life, Barbara, working at the A&P grocery store-although he didn't know that until years later. He proudly served his Country in the United States Air Force and was a Vietnam Veteran. Art and Barb were married a short time after he returned from his tour of duty. Art worked construction while in Illinois, and he and Barb relocated to Florida in 1974 with their two children. He worked for Prudential Insurance Company for over 25 years and enjoyed retirement. He had many hobbies including fishing, golfing, playing cards, telling jokes and gathering with family, friends and neighbors. Art was preceded in death by his parents and brother-in-law Nick. Art is survived by his loving wife of 52 years, Barb, his son Jimmy (Ginger), daughter Kim Hogan (Charlie), 4 adoring grandchildren who were the light of his life, Brianna, Steven, Matthew and Megan, his brother Brad (Lou), sister Sandy, sister-in-law Carol (Ace) and many nieces and nephews. One of Art's most precious accomplishments in life was being a grandfather. A gathering of family and friends for Art is scheduled for Sunday, February 28th from 12:00 PM to 1:00 PM at Steverson, Hamlin & Hilbish Funeral Home, 226 E. Burleigh Blvd., Tavares, Florida 32778. A celebration of life service will immediately follow at Steverson's beginning at 1:00 PM with Chaplain Rick Pence officiating and the United States Air Force performing Military Honors. In lieu of flowers, please make a donation to Cornerstone Hospice or the charity of your choice in Art's memory. To view Art's services online, click the link below: https://webcast.funeralvue.com/events/viewer/49035

The family of Arthur John Olsen Jr. created this Life Tributes page to make it easy to share your memories.

Send flowers to the Olsen family.