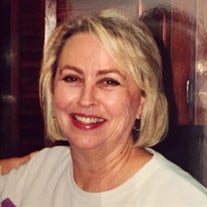 Marion Arnell (nee Gross) Connell, 78, of Mt. Dora passed away on Christmas morning after a long struggle with Alzheimer’s Disease. She was born in La Grange, Georgia in 1942, and traveled extensively as a “military brat”, including a two-year stint living in Tripoli, Libya. In the early 1960s, she moved with her family to Orlando, Florida where she became a dental hygienist. In 1965, she met and married Rodney Connell and the two were married for fifty-one years until Rodney’s death in 2016. Together they started a successful family business with operations located throughout the United States. She is survived by her two children, Bo (Monica) Connell of Wallingford, Pennsylvania, and Melinda (Chris) Ward of Eustis, Florida; and her four grandchildren Kaitlyn, Casen, and Kylie Connell, and Rodney Van Doren. She is also survived by her sister Ann (Bobby) Thompson of Homosassa, Florida. Services will be held on December 31st, at Steverson, Hamlin & Hilbish Funeral Home in Tavares, Florida, and she will be interred at Highland Memory Gardens in Apopka, Florida. Donations of flowers may be sent to 226 East Burleigh Boulevard, Tavares, FL 32778. Donations in place of flowers may be made to the Alzheimer’s Association. https://webcast.funeralvue.com/events/viewer/43801

Marion Arnell (nee Gross) Connell, 78, of Mt. Dora passed away on Christmas morning after a long struggle with Alzheimer&#8217;s Disease. She was born in La Grange, Georgia in 1942, and traveled extensively as a &#8220;military brat&#8221;,... View Obituary & Service Information

The family of Arnell G. Connell created this Life Tributes page to make it easy to share your memories.

Send flowers to the Connell family.