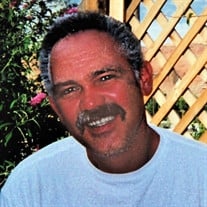 Anthony "Rick" Eric Pace, 66, a beloved father, uncle, grandfather, great-grandfather, brother, and friend, passed away on Thursday, August 19, 2021. Rick was born on April 28, 1955, in Ithaca, New York. He served his Country proudly in the United States Navy as a hydraulic mechanic on the USS Caloosahatchee. In 2010, Rick relocated to the Grand Island area from central New York and started his own business: The Old Time Barber Shop on Main Street in Tavares and recently relocated to Maud Street. Rick would cut hair like the "old school" barbers would, which in these days are hard to find. Depending on the cut, a person was in the chair only a few minutes with the exact style they wanted. He was a master barber, who took great pride in his work and pleasing his clients. When Rick wasn't working, you could find him enjoying his time in the great outdoors; hunting and fishing in New York and in Florida he enjoyed his time socializing at the Villages dancing, exploring, and traveling around the State of Florida. Rick is preceded in death by his parents; William "Bill" Pace and Mother Rene Mae (Austin) Pace, nephews; William "Billy" Pace and Scott Pace. Rick is remembered dearly and will be greatly missed by his daughter Theresa Pace and her partner Michael, of Mathews, Virginia, son Anthony Pace of Pennsylvania, brothers, Mark Pace and his wife Janice of Colorado and Brian Pace and his wife Jodi of Florida and nephew Mark Pace. Five grandchildren; Mercedes Wells, Alexis Wells, Mariah Norman, Alivia Garrett and Mikel Garrett as well as one great grandson Axton. A gathering of family and friends for Rick is scheduled for Friday, August 27th, 2021, from 1:00 to 2:00 PM at Steverson, Hamlin & Hilbish Funeral Home, 226 E. Burleigh Blvd., Tavares, Florida 32778. A celebration of life service is scheduled immediately following his gathering beginning at 2:00 PM at Steverson's.

The family of Anthony "Rick" Eric Pace created this Life Tributes page to make it easy to share your memories.

Send flowers to the Pace family.