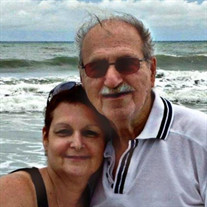 Angelo G. “Sal” Saladino, age 91, of Howey-In-The-Hills passed away on Saturday, August 22, 2020. He was born June 8, 1929 in Brooklyn, NY. He was the son of the late Angelo and Eva Biondo Saladino. Angelo was a native of New York until moving to Central Florida in 1998. He loved animals, enjoyed the outdoors, going to the beach, and cooking. Angelo is preceded in death by his parents; siblings; and daughter, Barbara Ann Scandalis. Angelo is survived by 3 sons and their families, Angelo J. Saladino (Barbara); grandchildren, Brianne and AJ of Ronkonkoma, NY; Joseph A. Saladino (Melodie) of Howey-In-The-Hills, FL; Thomas G. Saladino (Maria); grandchildren, Anthony and Thomas of Selden, NY; son-in-law, Chris Scandalis; grandchildren, Erica and Christos; and great-grandson, Johnny. The family will receive friends on Thursday, August 27, 2020 from 4:00PM until 7:00PM at Steverson Hamlin & Hilbish Funeral Home, Tavares. A Funeral Mass will be held on Friday, August 28, 2020 at 11:00AM at St. Mary of the Lakes Catholic Church. Interment will follow at Astatula Cemetery. Arrangements have been entrusted to Steverson, Hamlin & Hilbish Funerals and Cremations, 226 E. Burleigh Blvd., Tavares, FL 32778, (352)343-4444. Online condolences may be left at www.steversonhamlinhilbish.com

The family of Angelo G. "Sal" Saladino created this Life Tributes page to make it easy to share your memories.

Send flowers to the Saladino family.