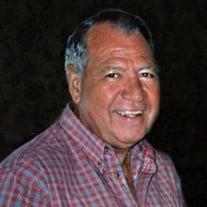 Albert H. Heckendorf, age 79, of Almond, WI died on December 7, 2020 at Cornerstone Hospice in Tavares, FL. Beloved husband, best friend, and soul-mate to Shirley (Muchowicz) Heckendorf of 22 years. Albert was born September 8, 1941 in Athens, WI, the son of George and Clara (Whitcup) Heckendorf. Albert served in the U.S. Army for three years-he was appointed to attend West Point, but chose civilian life. He moved to Wauwatosa, WI where he became a professional semi truck driver for Kohls Food Stores for 30 years. He also owned and operated The Club Shamrock in Big Bend, WI for 10 years. Albert loved hunting, fishing, golf, gardening, cooking and casinos. He is survived by his step-daughter, Crystal (Ryan) Whalen; daughters, Pam Ackerman and Aimee Draheim; son, Christopher Lau; sisters, Louise Pittsley, Ruth Wendt, and Lynn Kelly; and many loving nieces, nephews, and cousins. He was preceded in death by his parents; one sister, Tina Pogrant; and two brothers, Earl Heckendorf and Fritz Heckendorf. Upon Albert's request, there will be no service. In lieu of flowers, donations may be made to Cornerstone Hospice, 2445 Lane Park rd., Tavares, FL 32778. So many thank yous and prayers of gratitude to the nurses and staff at Cornerstone Hospice- They are truly angels on earth!

The family of Albert H. Heckendorf created this Life Tributes page to make it easy to share your memories.

Send flowers to the Heckendorf family.