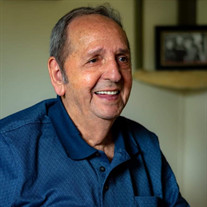 In Loving Memory of Aime Joseph Bariteau Jr., a beloved Husband, Father, Grandfather, Brother, Uncle and Friend. On Sunday, July 25th, 2021, Aime left us so quickly and so unexpectedly after a brief battle with Covid-19. He was 88. Aime was also known as Junior by many. He was born in Nashua, New Hampshire on October 31st, 1932 and was the son of the late Aime Joseph Bariteau Sr. and the late Harriet Lois (Starkweather) Bariteau. Aime was one of eleven children. He had six siblings and four step-siblings. At a young age, Aime served in the Army as an M.P. and then went on to spend the majority of his working years as a mechanic at Chandler Street Garage. At retirement, he and his wife Lorraine decided to move to Florida to escape the cold New England weather. One Christmas day, Aime and Lorraine set out for Leesburg, Florida and this is where he called home for more than 21 years. Aime loved good food and fishing on his pontoon boat. He also enjoyed the many amenities of the park in which they lived. He loved the company of his many friends and visits from his family. He was always so welcoming, often saying “have a seat and let’s have a cold one”, whether that be a beer, an iced tea or a Pepsi! This amazing man had such a kind and gentle soul, infectious laugh and a vibrant smile that could light up a room. He was adored by all that were blessed to know him and was so loved by his family and friends. To his children and grandchildren, Aime was more than special. To say he’ll be missed is an understatement. Aime’s passing will forever leave an emptiness in each of us. The wonderful memories will be cherished and we can only hope and pray that they will help us heal from such a great loss. Aime will forever be loved and will never be forgotten. Aime is survived by his wife of 64-years, Lorraine (Labbe) Bariteau, his first born, Debra Bariteau, his baby girl, Jessica (Bariteau) Emerson and her husband Donald, his grandchildren; Amanda Bariteau, Vanessa (Bariteau) Draper and her husband Charles and Tyler Emerson, his great-grandchildren; Natalie, Emily, Madeline, Avah and Aiden, his brothers; Wayne Bariteau, Gilbert Bariteau and his wife Kathleen, his sister Lois (Bariteau) Butler and his sisters-in-law; Rolande (Labbe) Suchocki, Joan Labbe, Lorette Labbe and Ellen Labbe. Aime has many nieces and nephews. Aime had recently suffered the great loss of his son, Russell Aime Bariteau. This was a very difficult loss for all, whereas Russell shared the many amazing qualities that Aime had. Family and friends looked forward to spending time with both of them. Aime was also preceded in death by six siblings and their spouses; three brothers, Donald Bariteau and his wives Arlene and Margaret, Caleb Bariteau and his wives Gwen and Sheila and Maurice Bariteau and his wives Susan and Lucky, two sisters; Evelyn (Bariteau) Dutton and her husband Ernest and Marion (Bariteau) Howell and her husband Harry. Another sibling passed at birth. There are many brothers-in-law and sisters-in-law that have preceded Aime as well; Robert and Georgette (Labbe) Leveille, Paul and Doris (Labbe) Gagnon, George and Alice (Labbe) Landry, Emile and Irene (Labbe) Vein, Arthur Labbe, Lawrence Labbe and his first wife Estelle, Armand Labbe, Edward Suchocki Jr. and Jean Bariteau. A Celebration of Aime’s Life will be planned for a future date.

In Loving Memory of Aime Joseph Bariteau Jr., a beloved Husband, Father, Grandfather, Brother, Uncle and Friend. On Sunday, July 25th, 2021, Aime left us so quickly and so unexpectedly after a brief battle with Covid-19. He was 88. Aime was... View Obituary & Service Information

The family of Aime Joseph Bariteau Jr. created this Life Tributes page to make it easy to share your memories.

Send flowers to the Bariteau family.